Feedback on the Throne Speech and Budget 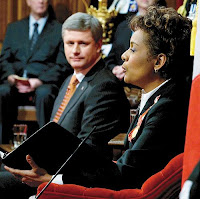 The consensus of space entrepreneurs, activists, and researchers is positive (more or less) when it comes to our Canadian throne speech last Wednesday and the follow-on Thursday conservative budget.


Although the budget makes no mention of the long awaited Long-Term Space Plan, the additional funding provided to the Canadian Space Agency to complete the Radarsat Constellation Mission is good news for the space industry.

The Spaceref.ca article titled "Budget 2010 - The News is not all bad for the Canadian Space Agency" goes into quite a bit of useful detail on the CSA budget and concludes:


The governments Economic Action Plan provided the Canadian Space Agency with $110 million over three years in last years budget. Of that, it was reported that $10 million had been committed while another $36 million will be committed this year. The $36 million for this year is lower than the original $60 million allocated last year. While the committed stimulus money is lower this year than expected it appears other parts of the CSA budget were left intact. This does not come as surprise. At the end of this month the government will release the 2010-2011 Report on Plans and Priorities for the CSA which will include the revised estimates for budgets in 2011-2012 and 2012-2013.

This last comment would seem to suggest that perhaps there will be something close to a long-term space plan reasonably soon only we'll end up calling it a "report on plans and priorities."

But, of course, others have a different spin. For example, over at Macleans magazine, Paul Wells in his column "Peering into tomorrow, blind as a bat" claims that:


There’s nearly $400 million over five years to develop new RADARSAT remote sensing satellites. That’s like buying a new laptop: it replaces off-the-shelf technology from a few years ago with new off-the-shelf technology that has benefited, automatically, like falling off a log, from Moore’s Law in the interim. Let other countries support the cutting edge of science; Flaherty will put his bets on the dull edge of technology.

Over on the R&D side, the Researcher Forum Blog, under the headline "

According to the budget breakdown as provided in the article "more than $1.1-billion in new research-related spending" is expected to be allocated over the next five years. In essence, "the research community is receiving more than 20% of new spending measures in this budget" and some of this money will end up funding space focused research.

So maybe the news is good. Some people over on the commerce and commercial side of the table might even go so far as to call the news great.

For example, the Techvibes Technology Blog called last week "As good as a week can get for Canadian tech startups." Although the article also mentioned Mantella Venture Partners and their launch of a $20 Million early stage technology fund and the Quebec Government commitment of $50 Million to three technology company seed funds the article states:


...on March 4th, Canada's Budget 2010 announced that non-residents will no longer need to pay withholding tax on the sale of shares in a Canadian corporation. This change to Section 116 of the Income Tax Act is particularly beneficial to the high tech sector which has lobbied for years to obtain relief.

The Canadian Venture Capital Association blog (titled Capital Rants) also approves of the budget changes. In the blog post "Change in tax law sends a strong signal to international investors that Canada is "open for business" they state:


The CVCA Applauds Budget Decision to Remove Foreign Investment Barrier (CVCA release Link). The CVCA has long requested the elimination of Section 116 as it pertains to the venture capital and private equity industry and we wish to congratulate the federal government for taking action," said Gregory Smith, President of the CVCA. "Many CVCA members, as well as a large number of individuals and organizations, have been actively encouraging the federal government to eliminate this section of the Income Tax Act which has had a dampening effect on cross-border venture capital and private equity transactions. Its removal provides an important signal to foreign investors that Canada welcomes their contributions to growing companies and employment."

The only real downside to the budget was this statement, taken directly from the budget which claims that:


Despite the high level of federal support, we continue to lag behind other advanced economies with respect to overall innovation performance, private sector investment in R&D, and the commercialization of research.

To ensure that federal funding is yielding maximum benefits for Canadians, the Government, in close consultation with business leaders from all sectors and our provincial partners, will conduct a comprehensive review of all federal support for R&D to improve its contribution to innovation and to economic opportunities for business. This review will inform future decisions regarding federal support for R&D. The Government is currently developing the terms of reference for the review.

It will be interesting to see the final form that this review of innovation performance takes. It sounds like something the Canadian Space Commerce Association should be discussing next week at their Toronto conference.
Posted by Chuck Black