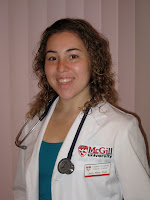 Canada doesn't have very many space focused contests, scholarships or prizes and the only obvious exception to this is the University of Toronto space design contest, focused on educational programming in science, engineering, and space exploration for secondary students. The "website of record" for this sort of activity is called Space Prizes and it contains absolutely no listing of Canadian based prizes so it seems reasonable to conclude that our exceptional individuals have to generally travel outside Canada in order to continue learning and being recognized as exceptional.

That's why it's so inspiring to hear about people like Laura Drudi, a McGill University student in the Faculty of Medicine, who has just received word of acceptance at the prestigious NASA Academy at the Ames Research Center.

According to the National Aeronautics and Space Administration NASA Academy website:


"The NASA Academy represents an immersive and integrated multidisciplinary exposure and training, for students with various backgrounds and career aspirations of critical importance to the National aerospace program.

The academic curriculum balances opportunities for direct contact with advanced science and engineering R&D and an awareness of the complex managerial, political, financial, social, and human issues faced by the current and future aerospace program.

Co-sponsorship of the Academy assures recruitment of meritorious students from previously under-represented areas of the country, into leadership positions for the aerospace programs of the future.

The Academy is cost effective, providing a richer program at a cost comparable to other, narrow-focus scholarships, internships, and fellowships."

But according to Drudi, the NASA Academy is the opportunity of a lifetime.
"This is the third time I've applied and Canada wasn't sponsoring anyone last year" she said during a phone interview from her home in Montreal. "You can't give up on something like this or you'll never get it. I've never given up and I just wanted to tell everyone else never to give up on their dreams."
She credits her success to strong mentoring from professors and supervisors including Dr. Joan Saary at the University of Toronto (who is her supervisor on the Space Medicine Directory, a cross-referenced listing of space medicine and space life sciences training opportunities) and Dr. Marlene Grenon, at the University of California San Francisco Department of Vascular Surgery (who supervised her during a literature review on the effects of altered endothelial cell function, mechanisms and interactions at the cellular level).

"Canadian astronaut Robert Thirsk dealt with lots of major physical changes during his stay on the International Space Station including bone demineralization, cardiovascular changes and quite a few other things" states Drudi, who felt that the only real prevention was lots of exercise, including lengthy sessions on the Combined Operational Load Bearing External Resistance Treadmill, or COLBERT, named after comedian Stephen Colbert.

"I'm drawn to this whole new extreme environment where you need to apply all that you know in new and innovative ways" states Drudi. "Nothing is really out of bounds and everything is useful. It's an exciting challenge."

Last October, Drudi attended the 60th International Astronautical Congress (IAC) in Daejon, Korea where she participated (along with Canadian Space Society President Kevin Shortt) in a session titled "Entering the Workforce and Strengthening the Global Community" which talked about how young professionals in space-related fields contribute to the global space community.

According to the IAC website, "It is widely accepted that attracting young people into the aerospace workforce is vital to the industrial base of nations involved in space-related endeavors."

This message seems widely accepted outside Canada so it will be interesting to see if it ever becomes the general consensus within.
Posted by Chuck Black

Email ThisBlogThis!Share to TwitterShare to FacebookShare to Pinterest
Labels: NASA, Universities and Science