According to the article, "Freed by the feds, Telesat begins the hunt for deals" written by Report on Business author Ian Marlow and published on March 14th:


"Canada's largest satellite company is mulling global acquisitions after the federal government said it would loosen foreign ownership restrictions in the telecom sector."

The article goes on to state that the federal government has indicated that this is being done as a preliminary to doing the same for the broader telecommunications industry. 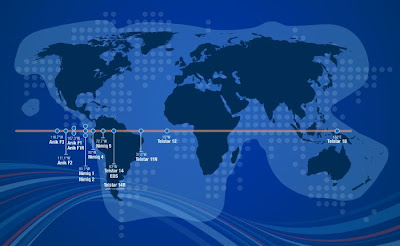 Canada's largest satellite company is, of course, Telesat which originated as a Canadian Crown corporation mandated to develop communications services in the far north, according to the document "The Creation of Telesat: Canadian Communications Policy, Bell Canada and the Creation of Myth" by Howard Fremeth.

With headquarters in Ottawa, the firm still maintains deep Canadian cultural, commercial and technical roots, although the cultural component might not be immediately apparent from a casual perusal of the Telesat corporate history page, which indicates that "Telesat is a newly formed company, but our industry leadership actually spans more than 40 years through the commercial and technical achievements of Loral Skynet and Telesat Canada."

But the cultural component is still there, at least according to activist and author Fred Wilson in his article "The fight is on for Canadian communications and culture:"


"Telesat was the single greatest Canadian telecom accomplishment since Alexander Graham Bell. When Anik I went up in 1972 we were the first country in the world to use satellites for domestic communications. Its first customer was the CBC, which used the satellite to broadcast to Canada's north."

While Telesat publicly promotes the possibility of new acquisitions to grow the company, Wilson quite reasonably points out that the proposed rule changes also make it easier for other companies to buy Telesat. He states that, while the majority of Telesat shares are still owned by the Public Pension Investment Board of Canada, "this is something that Telesat executives hope to change real soon."

A close look at issues surrounding a potential Telesat sale will likely turn up quite a bit of overlap with an actual failed 2008 bit for Macdonald Dettwiler and Associates (MDA) from US based ATK so it will be interesting to see how things play out should a buyer for Telesat ever come forward.
Posted by Chuck Black