Newspapers "Not Good Enough for this Blog!"

Traditional mass media has difficulty covering complex science and technology stories, at least according to organizations like the Science Media Centre of Canada and this is part of the reason why daily newspapers like the National Post, Le Journal de Montréal and the Vancouver Sun are seldom used as primary source materials when putting together this blog.

My normal writing pattern is to begin based on primary documentation provided through personal connections, news feeds, press releases, blogosphere comments or url links passed along from readers. I then follow-up with requests for clarification from the primary source and attempt to second source the material utilizing some fancy data-mining techniques learned from my marketing acquaintances. I also create multiple search engine queries to assist with independently validating the core material. Only then do I create the article for posting.

Where once this would have taken quite a bit of time, effort, snail mail and phone calls, the net has built a universe where this can be done quickly and efficiently by anyone with a computer, the correct methodology and a modicum of common sense in a way that simply can't be reproduced by what used to be called "the mass media." 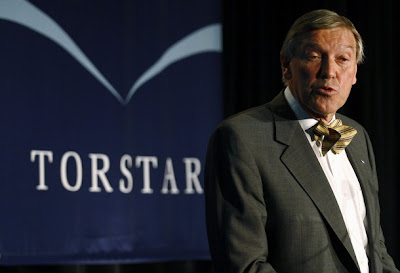 That's why it's so amusing to read the article "Papers blew it online: Torstar" written by Jason Magder for the March 13th issue of the Montreal Gazette. In it, Magder quotes Canadian media icon John Honderich as stating that he believes his industry made a fatal error when it offered all its content free online. According to the article:


"I think we did make a big mistake," said John Honderich, who serves as chairman of the board and of the voting trust for Torstar Corporation, which owns The Toronto Star. "The whole model doesn't work. Everyone is saying now that we have to back up and absolutely rethink where we're going on this whole debate."

According to the article, Hondrich states flatly that no newspaper appears to have been able to profit from offering content free online and believes the industry will move toward readers paying for content, an idea attempted previously by the New York Times, the Globe and Mail and several others but eventually abandoned.

The general consensus regarding paid content was outlined by Mark Glaser in his article "Your Guide to Alternative Business Models for Newspapers" published on MediaShift: Your Guide to the Media Revolution, which as a part of the US based Public Broadcasting System (PBS). Glaser states:


Charging for content has perhaps been the most challenging monetization strategy for online newspapers . While some newspapers initially charged for access to all of their news articles online, most of those pay walls have been dropped. The New York Times started a TimesSelect product to charge for Op-Ed columnists and other features, while the Los Angeles Times tried to charge for its CalendarLive site. Both publications gave up on those paid content initiatives

There are only a few exceptions where people will consider paying for online content, according to Glasser:


... most newspaper sites continue to charge for archives and other premium content in an attempt to diversify their revenue streams online.

People want everything for free online, but in some cases, they will pay for very specialized information that they can't get anywhere else. When Rupert Murdoch took over the Wall Street Journal, he had hoped to bring down the pay wall, only to realize just how profitable it was. Some pay walls will work.

Here we have the core problem with Mr. Hondrich's thesis that newspapers (especially his) should charge for their content. Since people will only pay for very specialized content they can't get anywhere else and there is very little specialized content in a mass market, generalized focus publication (except for the archives), Mr. Hondrich will find very few people willing to pay money for the content from his specific mass market, generalized focus publication.

For example, this blog is focused on specialized content of interest to commercial space entrepreneurs and relies heavily on primary source material not normally available in print publications. The lack of useful content plus the lack of references to primary source material is why daily newspaper content (like the Toronto Star's) is generally "not good enough for this blog."

So Mr. Hondrich, while it's certainly possible that newspapers blew it when they failed to react appropriately to the rise of the internet, in order to survive now they need to provide better news, easy access to primary source materials and specialized content that people can't get anywhere else.

You've got quite the challenge on your hands, sir. I wish you luck.