Schools out for Summer


I'll be taking the taking the next month off from writing so I can recharge my batteries and go to the beach. The Commercial Space Blog will return with all new articles on Tuesday, August 14th.

Of course, its not quite as if nothing more will get published from now until August 14th.

The Space Conference News (SCN) and Canadian Space Commerce Association (CSCA) websites will continue to function normally. The next SCN post (covering the August 2012 period) will go up on July 15th and subscription service members will receive their latest edition (covering the period from August until October, 2012) at the same time.

I'll likely also be posting CSCA submissions to the Aerospace Review written by Adam Trumpour ("Fostering Innovation, Creating New Markets: Novel Approaches to Space Policy and Programs"), Arny Sokoloff ("Creating an Indigenous, Canadian Small-Satellite Launch Capability") and myself ("Using Tools from the Mining Industry to Spur Innovation and Grow the Canadian Space Industry") on the CSCA website over the next few weeks. 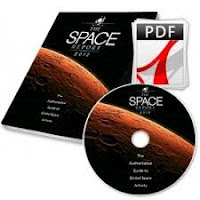 The twitter feed (@acuriousguy.com) will also continue to function.

As well, the 2013 edition of the Futron Space Competitiveness Index, should be available over the next few weeks and I've made a few minor contributions to the section on Canada (which is evidently enough to get me listed as a "contributor" to the publication).

And finally, I'll also be contributing articles to the latest issue of the NewSpace Global (NSG) monthly publication, titled "Thruster." NSG is an information services provider that brings "timely, accurate and critical information regarding the commercial space sector (i.e., "NewSpace") to the financial industry so that our clients can make more informed business decisions" and I look forward to helping them with this mission.

Enjoy your summer. I look forward to reconnecting with everyone next month.
Posted by Chuck Black No comments:

The 1967 Recommendation to Build a Canadian Launcher

It's not generally known that Canada's original blueprint for space activities understood that "Canada will, within the next decade, need to launch small scientific satellites at a rate which will justify supply from Canadian sources."

This specific statement is part of the 11th and final chapter (focused on "Recommendations") of the report entitled “Upper Atmosphere and Space Programs in Canada” which was written over 45 years ago, but which is still publicly referenced and as good of a description of our Canadian space interests as anything currently coming out of the Canadian Space Agency (CSA).

The report, a technical study originally commissioned in 1967 by the Science Secretariat (which was then a part of the Federal Government Privy Council Office), recommended using Canadian satellite and space technology for commercial activities such as communications and resource management instead of focusing only on scientific research.

Over time, the report became “Canada’s Original Blueprint” for space activities and is now known simply as the “Chapman Report,” out of respect for senior author, John H. Chapman (1921-1979).

The Chapman name was also attached to the John H. Chapman Award of Excellence, established in 2000 to celebrate and honor the members of the space community for the advancement of the Canadian space program, so you just know the author and his report were well respected.

But it's not commonly known that the report dealt with the issues surrounding the development of a Canadian small-sat launch capability. For example, there is this sentence in chapter 11 specifically recommending:

The initiation of a design and cost study for a small-satellite launch vehicle and related facilities for Canadian use.

Of course, by now there are a lot of those studies lying around, since every few years a new one is commissioned. The most recent, as outlined in the December 9th, 2009 Spaceref.ca article "A Rocket to Call Our Own? Canadian Space Agency Explores the Business Case," were commissioned during the 2008 - 2009 period and  have never been  made public.

Which is a shame, because the Chapman Report went far further than simply recommending further studies. Chapter 11 also understood that:

The domestic need for launch vehicles and space hardware is growing. Developments of this nature in other countries are fully supported by government on military or other grounds.


In essence, the Chapman report also recommended awarding contracts to Canadian companies to develop and build rocket components with the expectation that eventually the country would be fully capable of launching Canadian rockets from Canadian facilities with Canadian payloads into orbit.

In the 1960's this was a reasonable expectation since Canada then possessed substantial rocketry expertise as outlined in the report and at least one rocket actual launching facility located in Churchill, Manitoba.

In those days, the sky really was the limit for Canadian technology.

Maybe the CSA should release some of the those rocketry studies, just so we know if/ and/ or when the Chapman report contributors "fell off  the turnip truck," at least regarding this one, specific recommendation.
Posted by Chuck Black No comments:


The June 26th, 2012 announcement by BC based MacDonald Dettwiler (MDA) of the intent to acquire 100% of US based Space Systems/Loral (SSL) for US$875 million in order to open up the US commercial market and provide new markets for its Canadarm and DEXTRE derived on-orbit satellite servicing technology, essentially ends the firms current reliance on government contracts.

From now on, MDA will focus more on the international business environment and less on trying to get the attention of the Canadian government through a variety of private and public activities as outlined most recently in my May 27th, 2012 post "Federal Government says "Yippee Ki Yay" to MDA."

Here are three other short, anecdotal stories from those with Canadian connections who have decided not to bet their futures on the current Canadian business environment for space focused companies:

Hopefully, the Aerospace Review (which just finished up its call for public submissions on June 30th) will have a few suggestions for  addressing some of the concerns surrounding the organizations and people discussed above who have opted into going somewhere else in order to build their space company.
Posted by Chuck Black No comments: