If Borat were Canadian, he'd certainly be impressed with MacDonald, Dettwiler and Associates Ltd. (MDA) and COM DEV International who each had a pretty good week announcing  formal approval and funding for new space focused projects.

It's a shame these Canadian successes weren't matched by the Canadian Space Agency (CSA) which publicly admitted for the first time on Monday that their long awaited and long-term space plan (LTSP) hasn't yet been even presented to the Canadian government. 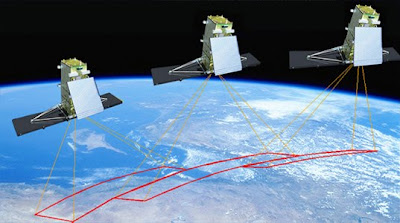 But first the good news.

COM DEV's success arrived with a contract from EADS Astrium worth $2.8M CDN for a series of four communications satellites, according to the March 16th, 2010 CNW Group article "COM DEV Wins Work on Multiple Satellites" which stated:


"COM DEV will supply switches, filters and multiplexers for use on the satellites which EADS Astrium is building for SES S.A. The satellites will deliver next generation broadcast, VSAT and broadband services in Europe and Africa."

The initial contract is expected to lead to further contracts valued in excess of CDV$14 million, with work scheduled to be completed by early 2012 at the COM DEV facility in Cambridge, Ontario.

MDA's success, expected since the federal government unveiled their budget two weeks ago, officially occurred a day or so later with the formal announcement of Canadian Space Agency (CSA) authorization for MDA to begin the design phase of the RADARSAT Constellation mission. This contract is valued to $11.8 million and is expected to be completed by June 11, 2010 according to the SpaceRef.ca article "MDA Gets Next Contract in RADARSAT Constellation Mission."

There is however, no word on whether these successes are related to the missing CSA long-term space plan (LTSP) which, according to the article "Canadian Space Policy Idles or Does it?" on the SpaceRef.ca website has not yet even been submitted to cabinet for consideration.

According to a quote attributed to Paul Engel, the CSA Director of Communications and Public Affairs:


"In the near future, the Agency will be fine tuning the input received from stakeholders and presenting the Plan to the Minister of Industry and Cabinet for consideration."

So after working on the LTSP for almost two years as part of a request by then Industry Minister Jim Prentice in late summer of 2008 and being told that "time is of the essence," the document still has not been submitted by CSA president Steve MacLean to cabinet as of March 2010.

The Canadian LTSP is essentially missing in action by the admission of the CSA Director of Communication and Public Affairs but at least he attached his name to the admission so now we know who should be fired first.

On the plus side, this development might not be totally unexpected. For example, there are small  but growing indications that COM DEV, MDA and others are beginning to set their own course, irrespective of the CSA and it's LTSP (although MDA has obvious support from the Canadian government for the Radarsat Constellation project on the basis of arctic sovereignty).

I went so far as to state outright that this could happen in my February 11th, 2010 edition of This Week in Space for Canada when I said:


"...we have private citizens, individual organizations and Canadian corporations each acting independently and without the CSA to build their own unique international relationships and space focused opportunities. It's gone so far that our future in space may no longer be tied to our national space agency, as of this week in space for Canada."

I then followed my comments up with a February 15th, 2010 post on this blog under the title "Ottawa Citizen: "Where did that Long Term Space Plan Go?" by commenting that "if Canada does not define a long term space plan, private business and academia will soon go about creating their own."

Welcome to our Canadian future in space. Does anyone see the CSA anywhere?
Posted by Chuck Black