A Short History of Akjuit Aerospace

That there are no new things under the sun has got to have been a platitude at least as far back as biblical times when a variation of the phrase was incorporated into Ecclesiastes 1:9, but it's often surprising how accurate the phrase remains even today. 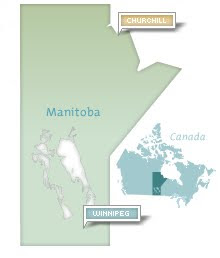 For example, those of us watching the growth of a variety of private suborbital spaceports (such as the Mojave Air and Space Port, Spaceport America, Spaceport Sweden and others) might be forgiven for forgetting that private spaceports have been around for quite a long time. One of the earliest was Spaceport Canada operated by Akjuit Aerospace just outside of Churchill, Manitoba in the middle 1990's.

Akjuit was initially backed by the well heeled Richardson Family of Manitoba (named after their patriarch, James Armstrong Richardson) but also included partnerships with Raytheon, investment firm Smith Barney who acted as underwriters for the project and STC Complex, a Russian organization contracted to provide surplus Soviet-era SS-25 ICBMs re-purposed as small polar orbiting launchers called START-1's (so named as they were made surplus by the 1991 Strategic Arms Reductions Treaty).

Located on the old Fort Churchill rocket launching site (initially built in the mid-1950s for sub-orbital sounding rocket launches) the plans called for a $300 million dollar investment which never materialized and Akjuit shut down in 1998.

I wonder if our present day spaceport developers have the business sense and enough money to avoid the fate of Spaceport Canada and Akjuit Aerospace?

Only time will tell if our space future is really "All About the Benjamins."

Puff Daddy - It's All About The benjamin
Uploaded by jekyllah. - Music videos, artist interviews, concerts and more.
Posted by Chuck Black