Who's On First! What's on Second!

If we add the American fuss over the recent National Aeronautics and Space Administration (NASA) changes, as epitomized in articles like "We Must Not Discard Greatest Innovator in History" from the February 27th edition of the Houston Chronicle to our homegrown Canadian fuss over the lack of an updated Canadian Space Agency (CSA) long term space plan, it's easy to forget that government space agencies with their funny acronyms and initial-isms aren't the only (or even the most important) players in the high frontier.

Keeping track of them is almost like Bud Abbott asking Lou Costello about the players on the baseball team.

For example, in Canada the list of government agencies with space focused activities isn't just limited to the CSA. It also includes the Department of National Defense (DND) which focuses on military space activities through its Directory of Space Development (DSpaceD) and the Department of Foreign Affairs and International Trade (DFAIT) which focuses on activities related to international cooperation and technology transfer.

Of course we can't forget the role of Industry Canada, which provides background information and documents on Canadian science and technological development strategy including Mobilizing Science and Technology to Canada's Advantage (May 2007) and the Mobilizing Science and Technology to Canada's Advantage Progress Report (June 2009) which is the closest thing Canada has had to a long term space strategy since the 2003 publication of the document titled "The Canadian Space Strategy."

And if you want government funding then you can't just hang around the CSA and hope for the best. You need to head to the National Research Council of Canada (NRC) which is the leading Canadian resource for R&D funding and technology-based innovation and has far more money to give away than the CSA, at least according to their website.

There are, of course, plenty of others and it's also worth noting that the CSA didn't even exist until March 1989 when it was formed through the Canadian Space Agency Act. Most early Canadian space successes and satellite launches were organized through the Communications Research Centre (CRC) and even the original Canadian astronaut program was part of the NRC in 1984 when the first Canadian went into space.

Of course, the above comments are not intended to diminish CSA contributions and activities which are substantial and impressive given the limited CSA budget and short period of existence. 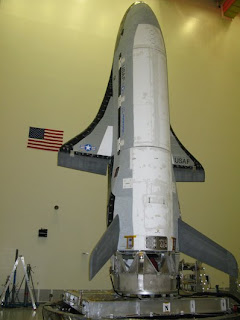 But the CSA is not and never has been the only Canadian, or even the only Canadian government player in this area. Often the mandate for these organizations overlap and while they might work together on specific projects, they also often end up duplicating each others work.

This sort of thing also happens in other countries which brings us (finally) to the point of today's post. According to the February 25th, 2010 post on the Spaceflight Now website titled "Air Force X-37B spaceplane arrives in Florida for launch":


A secretive military spacecraft resembling a small space shuttle orbiter flew to Florida in the belly of a cargo plane this week to undergo final processing for launch on April 19.

This "secretive military spacecraft" is, of course, the X-37B orbital test vehicle, the US Air Force follow-on craft to the Boeing X-37 advanced technology demonstrator, an unpiloted demonstration spaceplane intended to test future launch technologies while in orbit and during atmospheric reentry.

Although originally scheduled for launch as part of a space shuttle mission according to the June 2nd, 2009 article on Space.com titled "U.S. Air Force Aims to Launch Space Plane Next Year" the X-37B is now being launched atop an Atlas V rocket. It was last seen back in 2006 being test dropped from Scaled Composites White Knight. 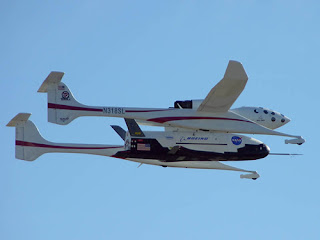 America's future in space is likely assured through various public and private programs like the X-37 and the White Knight because NASA was never the only American agency engaged in space activities.

As for us, it will be interesting to see what programs surface over the next little while to move forward Canadian space activities should the present conservative government decide that the Canadian Long Term Space Plan should not be disclosed as part of the upcoming budget.

Such an act will hobble the CSA's ability to develop, plan and influence their own future space activities but likely will not significantly alter other Canadian space focused activities which, much like their American counterparts, were never really dependent on any single government agency.
Posted by Chuck Black