The Men Who've Sold the Moon

As a child growing up in Winnipeg Manitoba, one of my fictional hero's was Delos D. Harriman, the Robert Heinlein character in the novel "The Man Who Sold the Moon." 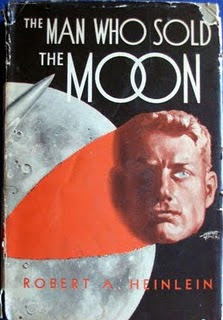 Written in 1949 and published in 1950 it tells the story of the first (at that time fictional) landing on the Moon by private companies controlled by Harriman, "the first of the new robber barons," who is determined to reach and control the Moon.

He tells his business partner he "would cheat, lie, steal, beg, bribe — do anything to accomplish what we have accomplished." His determination was rooted in a childhood desire to travel to the moon himself, but the responsibilities of running his financial empire make this dream impossible (at least until the sequel, "Requiem").

I never thought I ever meet a person who actually raised money selling the Moon but that was before I heard about Dennis Hope and his Lunar Embassy. Hope has been selling deeds to small parcels of land on the Moon since 1980 based on what he perceives to be a loophole in international law allowing him to claim full sovereignty of the moon as an individual (countries are specifically forbidden from claiming the Moon under the 1967 Outer Space Treaty, which was ratified by 98 UN member countries, including the United States).

Hope estimates that he has made $9 million selling one acre lots of land in outer space and claims that he, alone, has the legal authority to do so. He figures that the UN and other appropriate world bodies would have contacted him by now if he was doing something illegal, but no one has.

Only time will tell if his figuring is correct but at this point his views may or may not carry as much weight as those who attended the Space Security Index 2009, focused on the "Status and Future Trends in Space Security" at Canadian Embassy on January 21st.

The event, organized by the Secure World Foundation (SWF), the Space Security Index (SSI) and the Canadian Embassy in Washington focused more on describing the way the world "is" rather than explaining to us any emerging "future trends."

For example, according to the summary of the event (available online here) Clay Mowry, President of Arianespace, speaking on the topic of the commercial sector in the context of space security discussed:


the health of the satellite manufacturing and services industries and the launch industry that feeds upon them. He pointed out that these industries seem immune to the current global economic crisis, though he did mention that recent cancellation of a key U.S. military communication satellite program, continued strict application of International Traffic in Arms Regulations (ITAR) and a reemergence of artificially low Chinese launch prices will have negative impacts on the space industry.

Plus, even as a statement of how things are, major players are missing including RSC Energia, new players Space-X and Virgin Galactic or any of the two dozen plus private spaceflight companies currently offering or planning to offer equipment and services geared towards spaceflight, both robotic and human spaceflight. In essence, the Secure World Foundation has simply forgotten about a whole subset of growing space focused private industry that it needs to include in order to discern accurately any emerging trends in space.

It seems obvious that international experts are not only ignoring people like Dennis Hope who continues to sell pieces of the Moon to anyone looking for cheap land off the beaten track. They've also forgotten a whole bunch of real life future Delos P. Harriman's, presently running firms offering or intending to offer spaceflight related services.