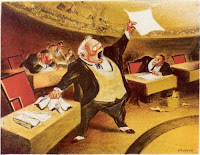 American politicians like Bob Bennett, Orrin Hatch and Rob Bishop (all three who are teaming up to save the Constellation and Ares programs according the space news site Galaxy Wire) and military commentators like the US Air Force Times ( which warns that "The Air Force and National Reconnaissance Office could face major increases in the cost of launching satellites") are obviously concerned over the emerging commercial space landscape.

But the changes outlined by the Obama administration's recent embrace of both commercial and cooperative international space activities are slowly gaining steam, even in Canada. For example:


In Canada, even the Aerospace Industries Association of Canada (AIAC) is acting supportive of private space industry by revising their March 4th, 2010 press release (which praised additional funding for the Canadian Space Agency to complete the Radarsat Constellation mission) with this March 11th press release titled "The Canadian Aerospace Industry praises the federal government for recognizing Space as a strategic capability for Canada." The latest press release says pretty much the same thing as the earlier one but drops statements included in the March 4th document on defense cuts impacting "the procurement and sustainment of aircraft" and AIAC disappointment "that no mention of Canada’s aerospace industry – a clear leader in innovation – was made in the federal budget."

It's likely that the second statement was dropped because the "space" part of aerospace was indeed mentioned in the federal government documents, even though the "aero" part wasn't.

Lastly, the Canadian Space Commerce Association Annual conference and general meeting is Tuesday, March 16th at the MaRS Development District. The theme of the conference is "The Growing Canadian Commercial Space Sector" which likely isn't directly related to aircraft either although we promise to mention them, once or twice.
Posted by Chuck Black