The Microsat Way in Canada 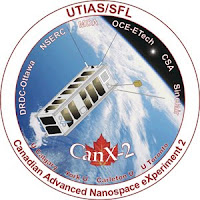 “You’re no doubt familiar with a publication called the Microsat Way in Canada?” asks Doug Sinclair, owner of Sinclair Interplanetary, and part of the team receiving this years Alouette Award, presented by the Canadian Aeronautics and Space Institute at its 15th annual CASI ASTRO conference, which just finished up last week in Toronto.
The Alouette Award, presented for "outstanding contribution to advancement in Canadian space technology, applications, science or engineering" was awarded to the CanX-2 micro-satellite team, headed by the University of Toronto Institute of Aerospace Studies (UTIAS). Sinclair was part of the team which built the CanX-2 micro-satellite, but awards don't seem to interest him.
"CASI is not the normal type of conference I attend but the organizers were very proactive in encouraging me to present a paper on developing, flying and evolving a Canadian Micro-satellite reaction wheel (presented with UTIAS colleague C. Cordell Grant). The award was simply a nice surprise." he told me during a phone interview earlier this week.

But it's still my answers to his questions that seem to interest him the most right now and so he asks me a second time. “Are you familiar with The Microsat Way in Canada?"

I say no and so he tells me that the title refers to a paper written years ago by Peter Stibrany and Kieran A. Carroll back when they both worked for Dynacon (now Microsat Systems Canada). In it, the authors discussed the potential of micro-satellites to reduce entry barriers to space utilization and the way micro-satellite manufacturing methodologies will change the economics of space applications. 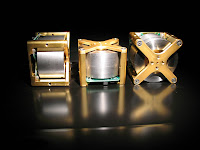 "The concepts discussed by Carrol and Stibrany in their paper are the keys to understanding the history of  the little wheels Sinclair Interplanetary builds and the manufacturing processes that allow cash strapped universities like UTIAS to launch small satellites and win awards like Alouette" states Sinclair, referring to the reaction wheel he initially built as his contribution to the CanX-2 and which his firm now sells to other satellite developers.

Wikipedia defines a reaction wheel as being:


"a type of flywheel used primarily by spacecraft to change their angular momentum without using fuel for rockets or other reaction devices...

They are particularly useful when the spacecraft must be rotated by very small amounts, such as keeping a telescope pointed at a star. They may also reduce the mass fraction needed for fuel."

But that's not the important part, according to Sinclair. The important part is developing an understanding of the construction techniques used to fabricate the reaction wheel and how these techniques differ from traditional satellite manufacturing techniques. He states:


"The traditional approach to satellite manufacturing is to take ten years and make sure everything is right before building any hardware. Since the due diligence requirements needed to make sure everything is right are normally quite onerous and fluid, it's very often simply too expensive, time consuming and complex to change a satellite component after fabrication unless the part obviously doesn't work. So you never learn anything using real world conditions until it's too late to change the design.

Micro-satellite manufacturers function differently because their focus is on inexpensive, quickly constructed components used frequently. This methodology quickly builds up a body of expertise since different things can be tried and small failures tolerated for the knowledge gained. As an example, the Sinclair flywheels used in CanX-2 were built out of inexpensive components and we could build new flywheels within a few weeks at a very low cost when ever they were needed.

So over a few months, we were able to build half a dozen prototypes with each one slightly better than the previous. So we had real world experience with the component which would influence future development and if we broke any single prototype or if it didn't work the way we thought it would then we didn't have to worry about breaking the program or blowing the budget.

This is how Canadian small and micro-satellite fabricators function, according to Sinclair and it's all based on the paper written by Carrol and Stibrany. It’s likely that this is a document that people like Doug Sinclair feel more of us should be reading.
Posted by Chuck Black