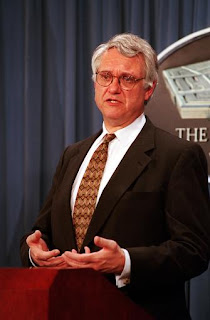 The Washington based blog National Defense is always an fascinating read for those of us obsessed with the US and it's effect on the Canadian military and space infrastructure. But the April 30th, 2010 article titled "Irrational U.S. Fear of China Undermines National Security, Says Former Pentagon Official" is especially useful for the insight it provides into late 1990's Clinton administration decisions relating to exports of technology, satellites and space-system components.

The article quotes former US deputy defense secretary John Hamre as stating "America’s paranoia about China has blinded U.S. policy makers and, as a result, has severely undermined U.S. security and economic interests." According to the article:


"The United States in the late 1990s decided to restrict exports of high-tech systems such as satellites and other key space-system components because it wanted to freeze China out of the market. The concern was that China would use that technology to enhance its ballistic-missile arsenal."

These laws were eventually codified as part of the International Traffic in Arms Regulations (ITAR) and are still in force today but the article then goes on to state that the legislation put the United States "in a position where it is now rapidly losing clout in the space market."

Another consequence of America’s “static” approach to industrial security is that the U.S. government and private sector have not been able to benefit from the technological advances that other countries have made."

In other words, unlike in Canada where the majority of space focused business is done between private organizations or as part of an international team sharing both scientific and technical data, the US space industry is almost entirely focused on one client; the US government as represented in either its military or civilian (NASA) guise.

I don't know about anyone else, but I like the Canadian way better.

For example, while the Canadian Space Agency (CSA) does have a role incubating new technology, Canadian firms are normally expected to develop outside sources of revenue and move into new markets as they grow. Plus, the Canadian Forces (CF), although often tasked with missions requiring a space capability, does not possess such an overwhelming budget or set of requirements so as to distort the commercial market all out of proportion (which is what seems to be happening in the US with the once canceled Constellation program).

Even the US based Aerospace Industries Association (AIA), although originally a strong supporter of ITAR, dislikes the legislation in it's current form, as can be seen from this discussion recorded at the American Enterprise Institute for Public Policy Research  October 2009 conference on Export Control Reform 2009: Enhancing National Security and Economic Competitiveness.

It's obvious by now that Canadian and foreign space focused companies have benefited from US ITAR legislation through the development of new capabilities and the growth of new (often "ITAR free") markets. Many have grown their business at double digit rates annually over the last decade and are now poised to move back into the US as part of the Obama administrations embrace of international cooperation in future space initiatives.

Of course, this promised US cooperation cannot occur without ITAR reform so the Obama administration has put forward a plan to reform export controls. The US Congress is expected to debate the issue later this year.

But what about the China space program that the Clinton administration feared so much in the 1990's? According to the article:


"The world’s most reliable commercial space booster is now in China, Hamre said. “Yet we thought we were going to freeze them out and they wouldn’t move forward if we didn’t work with them. … Was that an intelligent security strategy?”