"Micro-satellites are not just for science anymore" states David R Cooper and he should know at least a little bit about the topic given his position as Chief Executive Officer of Microsat Systems Canada Inc. (MSCI), the company acting as the Canadian Space Agency (CSA) prime contractor and systems engineer for the Near Earth Object Surveillance (NEOSSat) micro-satellite. 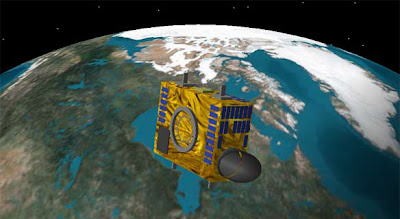 NEOSSat is expected to launch in 2011 and according to the CSA NEOSSat website:


In addition to searching for asteroids, NEOSSat will also update the positions of satellites and space debris orbiting high above the Earth as part of a project by the Defence Research and Development Canada (DRDC) known as HEOSS (High Earth Orbit Surveillance System). While this has been done from space before, it has never been done using such small spacecraft....

"NEOSSat is a technological pathfinder for us to demonstrate the potential of micro-satellite technologies to satisfy operational requirements of the Canadian Forces," explains Major Tony Morris of the Department of National Defense."

All of which makes this particular little micro-satellite quite the useful tool, but other small micro-satellites similar to NEOSSat (which weighs 75-kilograms and uses only 50 watts of solar power) are already proving their worth in many different fields, according to Cooper.

For example, while the enormous Hubble space telescope may have grabbed media attention over the last two decades, the future of astronomy may actually belong to smaller satellites like the Microvariability and Oscillations of Stars (MOST) micro-satellite telescope. According to Wikipedia, MOST is also the smallest space telescope in the world (which is why its creators nicknamed it the “Humble Space Telescope”).

But while the larger Hubble telescope is indeed a magnificent technology, it also cost billions of dollars to build and maintain which is multiple orders of magnitude more than the MOST. On top of which, groupings of micro-satellite telescopes like MOST could also combine their capabilities and signals together into "satellite constellations" with far greater capabilities than could be created within just one satellite or ground based telescope, no matter how large.

So the future may belong to the micro-satellite and this is what MSCI is banking on.

The firm operates the MOST micro-satellite under contract to the CSA and is using the lessons learned from it's design, manufacture and operation to not only improve MOST but to design and build the next generation of micro-satellites, starting with  NEOSSat. According to Cooper, there are:

The MMMB features a core mechanical structure approach, adaptable to a wide variety of payloads, and a suite of optional bus components to meet a variety of mission requirements.

In addition to MSCI's core expertise in the area of systems engineering and attitude control systems, the firm has developed expertise in structures and power sub-system and can call on long time strategic partners for thermal, communications, solar arrays, and computers and any other particular application.

MSCI also teams with an appropriate payload expert. "We don’t try to do it all ourselves" states Cooper. Instead:


We focus on those sub-systems where we have world class expertise the, crown jewels of the company and over time focus our R&D efforts to keep us leading edge in these areas. In parallel we work with our external partners in other sub-systems to keep them informed of directions we are going. This approach of standardizing the MMMB architecture, rather than the technology, allows us to use the latest advanced components while minimizing non-recurring engineering cycles.

This is the primary difference between a "micro-satellite" systems engineering approach and a traditional "waterfall" space systems engineering approach. The other major difference is the application of commercial electronic parts carefully selected and tested to meet the harsh environment of space. Using commercial parts instead of traditional space parts significantly reduces the cost and schedule impact of building a satellite. New designs can be rapidly prototyped, tested and modified if necessary.

Cooper feels that the benefits of this approach include:
For commercial customers, this means cost effectiveness with shorter implementation schedules, since an MMMB buss based micro-satellite can be deployed in as little as twelve months.
MSCI considers itself to be Canada`s oldest and most successful Canadian micro-satellite company and also the last independent micro-satellite company left in North America. "All the other US based companies have been acquired by "big space" companies," states Cooper who continues:


"We're the only one left but this has allowed MSCI to focus on what it does best, which is growing our core micro-satellite business."

The MSCI built MOST micro-satellite will reach its seventh birthday on June 30, 2010 and is expected to be still in orbit and going strong which provides solid proof that the MSCI claims are real and not just a good science fiction story.
Posted by Chuck Black