Mining as a Model for the Commercial Space Industry

Eva-Jane Lark, a BMO Nesbitt Burns VP and investment adviser, space advocate and author of EVA Interviews: The Business of the new Space Age™ sent me an e-mail last week referencing a recent interview I did with Elizabeth Howell over on the Pars3c web blog under the title "High Five: Chuck Black, Canadian Space Commerce Association."

In the article, I stated that the original idea of funding space focused Canadian companies though an extension of the tax credits presently provided to the Canadian mining industry came from John Chapman, a retired mining executive and three Macdonald Dettwiler and Associates (MDA) employees who first presented a paper on the topic at the 2008 Canadian Space Summit.

I think this was her way of reminding me that the idea has a surprisingly broad genesis going back several years in Canada and even possesses US based advocates like Burke Forte, Director of the 8th Continent Project (an organization affiliated with the Colorado School of Mines) and quite a few others.

So what is this idea all about anyway?

To begin with, the modern intersection of mining and space activities goes back to 1972 and a soil sample retrieved by the Apollo 17 astronauts containing helium-3, a lightweight isotope of helium suitable for fueling atomic reactors, at least it does according to "Mining the Moon" an article published in the December 7th, 2004 edition of Popular Mechanics. 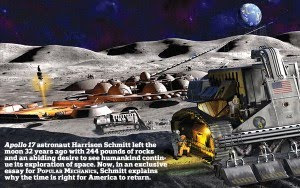 According to the article, the "vast stores" of this "nonpolluting nuclear fuel" are the key to our technological future and also a great way to make lots and lots of money once a whole bunch of intermediary technological, financial and market difficulties have successfully been dealt with.

But details are for accountants and not many accountants ever became space advocates so the extraterrestrial mining of exotic resources slowly became one of those things brought up (along with space based solar power and space tourism) when advocates wanted to give unsupported, "pie in the sky" examples of the enormous commercial potential awaiting those brave or foolish enough to invest in the high frontier. 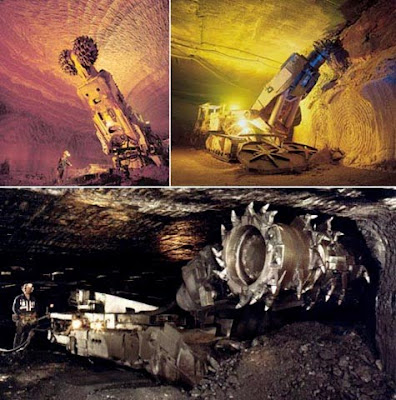 But after awhile, even the mining companies jumped on the bandwagon and began to point out that the same tools used to scrape minerals off the ocean floor or dig deep into the bowels of the Earth are also suitable, with appropriate modifications, for mining pretty much anywhere, even on the Moon or in the asteroids.

Of course, they weren't initially terribly serious about the idea, although it did turn out to be a good way to obtain grants to fund R&D activities and gain publicity with articles like this 2007 Universe Today post "Heavy Construction on the Moon" which promotes Caterpillar Inc. the worlds leading manufacturer of construction and mining equipment.

But over time, mining and resource companies started coming into more direct contact with space based activities through their use of earth imaging satellites and technology to assist with resource location and development activities.

Eventually all this cross-pollination and idea exchanging got the space gurus and the mining geniuses talking about commonalities and several concluded that the industries are quite similar, with both being highly speculative and requiring large amounts of money up-front for a potential return on investment that could take decades to materialize.

But since mining companies often depend on tax credits to fund their activities, they also normally have quite a few accountants on the payroll and some of the brighter accountants started thinking that there was essentially no real reason why space focused companies can't use the same tax credits that mining companies use to raise money, just so long as mining eventually occurs somewhere.

Even if that somewhere eventually ends up being in space.

After all, the costs for deep water mining and resource collection are the same order of magnitude as space focused activities these days. Plus, space based resource collection also has less terrestrial economic and ecological consequences should something break (and pretty much any British Petroleum public relations person should be able to provide some background in that area right now).

I finally came across the idea in 2008 when retired mining executive, John Chapman and several people working for Canadian space focused firm Macdonald Dettwiler and Associates presented a paper on the topic at the 2008 Canadian Space Summit.

According to their abstract (which is available online here):


"Financing of space research, exploration and development in the past has been done mainly by governments. To create a vibrant and sustainable space program, the private sector needs to be aggressively involved, building upon the foundation established mainly by the USA and Soviet Union governments.

According to the authors, the conquest of space is no longer rocket science. It's all about the tax code and accounting. Raising money is simply a question of extending the tax code provisions already in use by the Canadian mining industry to cover space focused activities.

Of course, this idea has essentially dropped off the face of the Earth since the presentation in 2008, but now might be a good time to revisit it since Canadian Space Agency (CSA) President Steve MacLean recently indicated that Canada needs $2 billion over five years in order to "put us at the table" according to the article "Bill to push Canada in space to top $2B: MacLean" from the PARS3C web blog.

$2 Billion over five years seems like a pretty small amount compared to what the Canadian mining industry can raise. Perhaps the Canadian space industry should take note.

Besides, no one is going to fund anything off the Gulf coast for the next little while and the money might just as well go somewhere useful.
Posted by Chuck Black