According to Pulitzer Prize winning author Paul Ingrassia in his June 1st, 2010 Wall Street Journal article "The Lessons of the GM Bankruptcy," it's been one full year since auto manufacturer General Motors (GM) filed for bankruptcy protection. According to Ingrassia:


Everybody knew it was ridiculous and unsustainable to pay workers indefinitely not to work (in the United Auto Workers union's Jobs Bank), to keep brands such as Saturn and Saab that hardly ever made money, and to pay gold-plated pension and health-care benefits to employees. But all of these practices, paid for by mounting debt obligations, continued for decades in GM's 30-year, slow-motion crash... 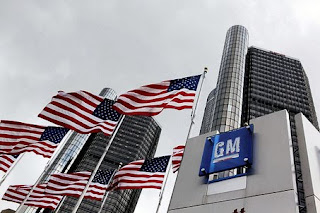 Problems denied and solutions delayed will result in a painful and costly day of reckoning.

Of course, the day of reckoning eventually did arrive.

The Jobs Bank is now gone (as part of the deal to help GM, Ford and Chrysler secure bailout funds), the Saturn brand will be phased out in 2011 and Saab was recently sold to the Dutch automobile manufacturer Spyker. GM is a much smaller company today and what's good for General Motors is no longer necessarily good for the USA and "vice versa," as was once said by Charles Edwin Wilson, the US secretary of Defense under Dwight D. Eisenhower.

So what does this have to do with my August 27, 2009 post on "NASA as the Next General Motors and What That Means for Canada" where I compared the General Motors of 2007 with the NASA of 2009?

That's easy. The National Aeronautics and Space Administration (NASA) isn't formally bankrupt yet but their time of reckoning is coming. We likely have another year or two before the final crunch occurs and this is much like the GM of the 2007 - 2008 period.

Of course, we're not talking about a private corporation so what happened at GM can't happen in the same way at the US space agency. It's even possible that the process will move forward as the Obama administration expects and the US president outlined in his April 15th, 2010 speech from the Kennedy Space Center.

But no matter what, NASA employees and their subcontractors will need to develop new skills, associations and capabilities to survive or else risk slipping into the ranks of the unemployed as the old NASA becomes the new.

These changes are driven by the funding crises within NASA. As outlined in the 2009 NASA Review of US Human Space Flight Plans Committee Final Report, existing plans to fund the Ares/ Constellation program and explore the Moon and Mars are financially "unsustainable" for NASA in much the same way that GM's fiscal structure and employee commitments were described as being "ridiculous and unsustainable" by Paul Ingrassia.

The first change is represented by the launch yesterday of the Space-X designed and built Falcon-9 rocket, videotaped below from the roof of the Vehicle Assembly Building at the Kennedy Space Center as it lifted off from nearby Cape Canaveral.

This represents the opening of NASA to new and non-traditional space focused companies with less infrastructure to maintain and younger, perhaps more innovative employees. These "newspace" firms are in stark contrast to the gigantic "legacy" manufacturing and research facilities (plus their associated jobs which are generally held by people well into their 40's, 50's and 60's) that have typically grown up around NASA contractors over the last five decades.

Of course, the "legacy" companies and their political representatives aren't likely to take kindly to the emergence of "newspace" firms as demonstrated by the June 4th post "Congressional Reaction to the Falcon 9 Launch" from the Space Politics blog. But there is no longer any money to pay the costs associated with legacy companies so these larger firms will eventually lose their budget battle.

The second change is likely to be an increase in international cooperation which is the logical outgrowth of the fact that the US no longer possesses sufficient capital to create gigantic "cost is no object" space focused projects independently, as was done in the 1960's during the Apollo era.

But the problem with international cooperation is the potential for two way sharing of knowledge. This could encourage some international space focused organization with lower legacy operating costs to figure out how to run an entire space program on their own more effectively and for less money than the US. There are obvious parallels here with the way that Toyota, Hyundai and a whole bunch of other car makers slowly developed methods to compete effectively with GM and other American firms.

Which brings us to the third change, which is the investments in breakthrough propulsion and other new technologies which are perceived by the American's as the "game changers" needed to keep ahead of other countries who can certainly compete on costs using existing technology, which was mostly developed in the 40's, 50's and 60's.

So now we know what's coming  down the pipe at NASA. We've got the opening up to new and non-traditional space focused companies, international cooperation and the search for "game changing" breakthrough propulsion and other new technologies.

Now that Canadian's know what the US policies are and why they are that way, we're in a better position to take cooperate, contribute and even take advantage of the new NASA.

As for GM, they're also doing things a bit differently lately and their recent news is decidedly more upbeat with the May 28th announcement that the company is starting a $100 million USD venture fund and the June 1st announcement from GM Canada that it is investing a further $224 million CDN to build a new line of fuel-efficient transmissions.

The same thing will happen to NASA after it gets it's house in order. After all, everything new has a beginning.
Posted by Chuck Black