Russia Today's Gayane Chichakyan was right there, perhaps even a little too close to the action that looks to be only a few dozen meters behind as she provides launch coverage and background material while being blown about by the blast of the Soyuz TMA-16 spacecraft's engines.

For those who don't, this Kitchener, Ontario based organization is defined on the about page of their website as focused around something called a "hackerspace," which is a:


physical location where like-minded people get together in a cooperative environment to pool their knowledge, experience, and physical resources with a goal to bringing into reality the projects about which they’ve been dreaming.


The sky is the limit, almost literally: projects range from building hardware to building art, from restoring antique equipment to putting electronic blinking eyes in a crocheted doll.


According to the Canadian Encyclopedia, the Cirque du Soleil was formed in Quebec in the early 1980's by a group of enterprising street performers:


At that time, the province of Québec did not have a circus tradition, so this group of stilt-walkers, jugglers, fire-eaters and buskers banded together to create a performance platform for themselves. They called themselves "Club des Talons Hauts" or "High-Heels Club," since most of them were stilt-walkers.


The group organized a festival "Fête Foraine de Baie St-Paul" (The Baie Saint-Paul Fair), in which the street performers could exchange ideas and techniques and this led to the birth of Cirque du Soleil.


So in the 1980's a group of performers banded together to exchange ideas and techniques and this led to the creation of the Cirque du Soleil and in 2009, another group banded together to pool their knowledge and expertise in much the same way. 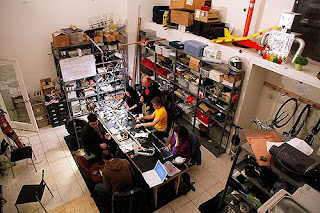 I'm not sure yet what the Kwartzlab Society wants to create or build or accomplish over the next few years but at least one of their members has been active in the Canadian Space Commerce Association (CSCA) and worked with the DaVinci Project when it competed for the Ansari X-Prize several years back.

Perhaps in twenty or so years, members of the Kwartzlab Society, using the same techniques as led to the Cirque du Soleil and Guy Laliberté's current adventure will themselves get to hobnob with astronauts and cosmonauts aboard the International Space Station (or whatever ends up replacing it).

As for Laliberté, the Soyuz TMA-16 spacecraft is scheduled to dock at the International Space Station on Oct. 2, where Laliberté, Surayev and Williams will join Canadian astronaut Bob Thirsk and five others.

The Montreal Gazette has indicated that the "CBC Might Air Show From Space" when Laliberté hosts his unprecedented program from the International Space Station, titled "Moving Stars and Earth for Water" on October 9th. The production is part of his plan to raise awareness of water-related issues and is organized through the ONE DROP Foundation.

Canadian billionaire and circus entrepreneur Guy Laliberte has blasted off from the Baikonur cosmodrome with the 21st mission to the International Space Station.
RT's Gayane Chichakyan was there for the lift-off.