Guy Laliberté, New Media and the 119th Carnival of Space

The 119th Carnival of Space has just been posted on the Planetary Society website and it's interesting to note that their choice for the top space focused story this week is an article from the MS-NBC Cosmic Log on Cirque du Soleil founder Guy Laliberté and his plans to host a global extravaganza starring Al Gore, U2, Dr. David Suzuki, Peter Gabriel, space station astronauts Frank De Winne and Julie Payette plus Laliberte's own Cirque du Soleil performers along with quite a few others from the International Space Station on October 9th.

The article has even been picked up by the regular media including this article in the Montreal Gazette which states:


Adding a wondrous twist to the halting issues of climate change and water conservation, Guy Laliberté will host an unprecedented live show from Earth’s orbit on Oct. 9.

The Cirque du Soleil founder and former fire breather announced yesterday the 120-minute live show will involve shows broadcast from 14 cities, starting in Montreal, and he’ll conduct it all from the International Space Station.


The show will promote the ONEDROP Foundation,  which is using this "poetic social mission in space" as described on their website, to raise awareness of the need for accessible water supplies to fight poverty and disease. It will reportedly be carried live on the Internet through the onedrop.org website and in partnership with AOL.com.

It's interesting to note that most of  the links provided to reference this story (with the exception of the links to the Montreal Gazette and perhaps the MS-NBC Log sites) come from internet based new media sites. It's essentially a platitude to even mention this but these new media sites are the future of news no matter what large media owners such as Rupert Murdoch might think.

It's also interesting to note that Mr. Laliberté (no matter what else he may be) is turning into a newspace entrepreneur without peer as he builds profitable, far reaching and useful connections between his day job at the Cirque du Soleil and the various businesses and national organizations involved in government and civilian space access, the political and social activists concerned over climate change, access to fresh water, the commercialization of the worlds water supplies and even simple recording artists looking to sell a few extra records. 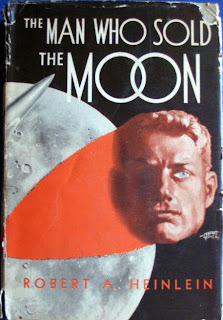 It's a far better performance than expected in June when his trip was first announced and I suggested "Let's Not Embrace our First Canadian Fire Breathing Space Tourist Too Tightly."

At this point, it's a performance worthy of Delos D. Harriman, the Robert Heinlein character in the novel "The Man Who Sold the Moon" and I look forward to seeing the big show on October 9th and learning more about future business opportunities that may follow from this adventure.
Posted by Chuck Black