It's Columbus Day in the USA and Thanksgiving in Canada but neither one of those holidays seems to have deterred U.S. President Barack Obama from finally signing into law a three-year NASA authorization bill on October 11th. 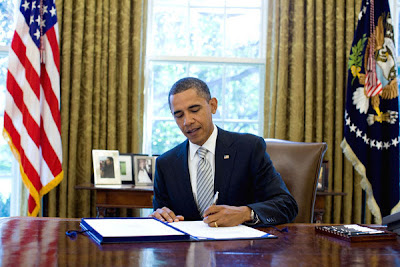 The bill, formally known as the NASA Authorization Act of 2010 (S. 3729), is widely acknowledged as setting a new course for the American human spaceflight program according to the October 11th, 2010 Space News article, "President Obama Signs NASA Authorization Bill."

However,  according to the October 8th, 2010 article in the Bay Area Citizen titled "NASA bill almost didn’t pass," it took an intense 72-hour Texas based bipartisan drive to muster the 2/3rd vote necessary in the US Congress to pass the legislation so the US President could sign it into law. The article states that the focus of this last minute congressional drive was the need to avoid massive Texas aerospace industry layoffs.

But of course, everyone knows that the final financial battles are still to be played out.

Although the bill is considered to have passed overwhelmingly and received broad bipartisan support with the budget mandate covering the next three years, there are a great many gaps in the final document still to be dealt with. For example, according to this October 11th, 2010 post on the Space Politics blog:


... the fact that the president is signing the bill isn’t surprising, but what’s important in the near term is that it starts the clock on a number of studies due over the next several months, even as the agency waits for appropriators to act on funding the agency for FY11.


which includes a new heavy-lift rocket to be developed in Huntsville, is anything but assured, according to a press conference today. Funding still has to pass in what NASA supporter Sen. Bill Nelson, D-Fla., predicted will be a "tough" lame duck session of Congress after the November midterm elections.

Smart Canadian space focused companies are going to be watching the next session of congress very closely indeed in order to see the way the wind is blowing over our long term and (up until recently) quite reliable space traveling partner.
Posted by Chuck Black