According to the Wednesday, October 20th, 2010 Bloomberg BusinessWeek article "Canadian Stocks Rise as Metals Rebound; Teck Resources Gains" BC business icon and Canadarm builder MacDonald Dettwiler (MDA) gained 3.9 percent on the Standard & Poor’s/TSX Composite Index Wednesday after "two people with knowledge of the matter" said MDA is exploring the sale "of all or part" of the company. 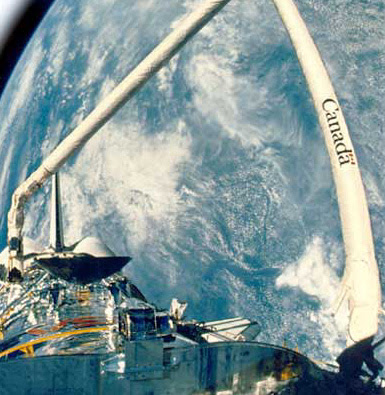 By Thursday, the Vancouver Sun had taken up the story under the title "MDA stock soars on sale speculation." According to the article, MDA had issued a press release indicating that the company "is not evaluating a sale of its Systems division or any portion thereof."

But by Friday, the Vancouver Sun had announced that the iconic "Canadarm maker announces sale of service contracts:"


One day after denying rumours the company was on the block, Richmond based MacDonald Dettwiler announced the sale of 11 long-term managed-service contracts for $4.7 million. The contracts operate MDA-delivered solutions that deliver back office service for the provision of land and property data to United Kingdom Local Authorities, the company reported in a media release.

Oddly enough, very few people seem to have picked up on a second MDA story of the week. As outlined in the October 21st, 2010 Commercial Space Watch article "MDA expands RADARSAT-2 information solution with operational customer:"

Even odder is the fact that there is not just one but multiple stories covering recent MDA Product division activities including "MDA to deliver land information to confidential customer" from CWN and "MDA to provide property claims information solution to a Top 5 Homeowners Insurance Underwriter" from the Digital Journal website that the traditional media sites seem not to have picked up on.

If I had to take a guess at what was going on (and could keep a straight face while typing "two people with knowledge of the matter") I might even suggest that MDA is dealing with under performing assets in their Products division (which distributes legal, real estate, satellite and aerial data) by selling them off and then focusing on new opportunities with a better potential return on investment.

This approach contrasts with ComDev International ex-CEO John Keating who responded to his firms revenue shortfalls earlier this year by doing nothing and getting fired.

While the federal government previously blocked the sale of the MDA Systems division (which sells satellite, robotics and defence technology) to Alliant TechSystems (ATK) in 2008, it seems to have no particular attachment to the MDA Products division as a whole or to any specific activities within the division.

It's also worth noting that the two contracts just announced with CLS will likely be booked as revenue for the MDA Products division as will the $4.7 million sale of 11 long-term managed-service contracts which should help shore up the divisional bottom line.

Whatever else we might think, it's reasonable to expect real information and some context for the events of the last few days to come out next week when MDA plans to release its third quarter 2010 financial results as part of their quarterly earnings conference call.

MDA president/ CEO Daniel Friedmann and Executive Vice President/ CFO Anil Wirasekara are both expected to be on the Wednesday, October 27, 2010 call which will be Webcast live and then archived at:
http://www.mdacorporation.com/corporate/investor/events.cfm.
Posted by Chuck Black