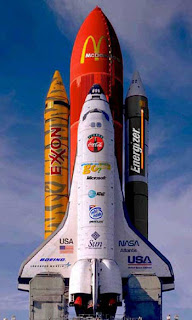 As outlined in my June 19th, 2009 post "Venture Capital and New Space Investments" the venture capitalists who provided seed funding for so many other industries have so far stayed away from commercial space activities (with the notable exception of Space-X).

Part of the reason for this, according to the July 26th post on the Space Busine$$ Blog titled "5 out of 100 - Deal with It!" is that for every 100 companies a venture capital firm invests in, only five or so ever make a profit and most of the rest will be total write offs (the VC's will still make money overall despite the fact that 95% were losers but need a minimum of 100 companies within the portfolio in order to mitigate risk).

With so few quality space firms in which to invest, the author suggests structuring companies less like defense contractors and more like Silicon Valley start-ups (or film and video production houses) by establishing separate companies for each product or service.

But in Canada, that strategy might not work because our venture capitalists are staying away from everything, not just the space focused firms.

No one really knows why but it's so bad here that venture capital firms are in danger of becoming an "irrelevant source of financing" according to the October 8th, 2010 post on the Canada.com website "Weakness in Canada's venture-capital system at `crisis levels.'" The article quotes John Ruffolo, with business consulting firm Deloitte as stating "This persistent weakness in the country's venture capital ecosystem has now reached crisis levels and it has serious implications for the future of our technology sector and the future of Canada."

According to the Deloitte website, the firm sponsors a variety of entrepreneur awards including the Deloitte Technology Fast 50 technology awards, Canada's 50 Best Managed Companies which focuses on Canadian-owned and managed private companies with revenues over $10 million and Canada’s Outstanding CEO of the Year so you'd think they know what they're talking about.

But it does sound grim for Canadian companies and innovation.

Even in the United States, the venture capital industry is in the midst of massive changes as outlined by entrepreneur Naval Ravikant in his recent keynote presentation at the Capital Factory’s demo day.

Ravikant's primary point is that venture capital industry is a business, open to pressure from clients and attack by start-ups with disruptive new business models and technologies just like any other business. Ravikant also suggests that traditional VC firms are likely to respond to these business pressures by splitting into service organizations (similar in size and function to the members of the Canadian Association of Business Incubators or the Alliance for Commercialization of Canadian Technologies) and smaller pocketed angel investors (which in Canada, are mostly members of the National Angel Capital Organization) who will combine into groups to fund new projects.

These service models also mimic software and media focused industries (where masses of separately incorporated individuals with specific expertise come together to create films under the banner of small firms often acting as agents for a other firms in order to multiple investors from losses). They are also in stark contrast to most of our aerospace industry where larger firms depend on one or two "anchor" clients to fund ongoing operations.

This might be the secret to future Canadian entrepreneurial success. We should follow in the footsteps of our fleet footed American cousins by breaking up both our start-ups and support and financing mechanisms into smaller and more nimble components.

And some of them can even be space focused.
Posted by Chuck Black