Beginning in September, the Special Purpose Dexterous Manipulator (also known as DEXTRE), that remarkable Canadian built appendage to the International Space Station (ISS) will face stiff competition in the form of a robot designed by General Motors and the National Aeronautics and Space Administration (NASA).

Named Robonaut 2 and bearing more than a passing resemblance to The Stig, secretive race car driver in the BBC television program Top Gear, the new mechanism is rocketing into orbit this fall aboard the space shuttle Discovery, at least according to the recent press release "NASA to Launch Human-Like Robot to Join Space Station Crew" which also states:


Robonaut 2, or R2, was developed jointly by NASA and General Motors under a cooperative agreement to develop a robotic assistant that can work alongside humans, whether they are astronauts in space or workers at GM manufacturing plants on Earth.

The intent of this collaboration is obvious. NASA is keen on providing a potentially profitable and possibly job creating earthbound application of space technologies to placate angry congressmen and surly senators while GM is keen to inform people that it can do more than simply go bankrupt by building bad cars.

The effect this will have on Canadian contributions to future NASA initiatives is less clear since robotics has always been considered an acknowledged area of Canadian expertise. The development of a second area of space based robotic expertise tied to GM and funded by NASA could reasonably be considered direct competition to Canadian robotics projects like DEXTRE and the CanadArm.

Of course, NASA also seems to think that Robonaut 2 is more "human" looking than other dexterous robots and perhaps that's part of the point: 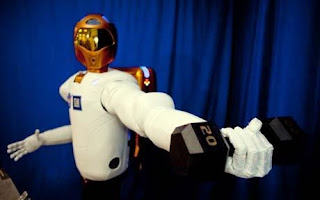 "The dexterous robot not only looks like a human but also is designed to work like one. With human-like hands and arms, R2 is able to use the same tools station crew members use. In the future, the greatest benefits of humanoid robots in space may be as assistants or stand-in for astronauts during spacewalks or for tasks too difficult or dangerous for humans. For now, R2 is still a prototype and does not have adequate protection needed to exist outside the space station in the extreme temperatures of space."

But for at least for the next little while our Canadian DEXTRE, which might be ugly but does at least have adequate protection to function in space as a stand in for astronauts, will continue to do so while Robonaut 2 remains within the safer and more comfortable interior accommodations of the ISS Destiny laboratory.

So what does the Canadian dexterous robot look like? Take a look for yourself.