It's a Small World After All!

Whether you call them micro-satellites, nano-satellites, miniaturized satellites, small-sats or something else entirely, these useful tools of unusually low weights and small sizes are big news for Canadian space focused businesses.

This is partially the result of the recently concluded Workshop on Suborbital Platforms and Nanosatellites, organized by the Canadian Space Agency (CSA) and held at the John H. Chapman Space Centre in Longueuil, Quebec on April 14th - 16th.

But the workshop is really only acting in a supporting role to the recent announcement that COM DEV International has purchased Routes AstroEngineering (Routes), a privately owned Ottawa-based company specializing in the design and manufacture of advanced instruments mostly for micro-satellites.


“In absorbing the assets of a key subcontractor, we are mitigating risk by securing the completion of deliverables on a couple of our existing government programs, while at the same time adding new capabilities and complementary technology,” said John Keating, CEO of COM DEV. “This purchase is very well aligned with our strategic thrust on instruments and microsatellites. We have worked with the Routes team on a number of programs, and I expect their highly talented and experienced staff to strengthen our COM DEV Canada division.”

Routes has been a significant player in the Canadian space industry for 22 years with contributions including the OSIRIS ozone monitoring instrument for the Swedish Odin Astronomical/Aeronomical Satellite; a power subsystem for the Canadian SCISAT 1; an electronic subsystems readout for the Ultra-Violet Imaging Telescope component of the Indian ASTROSAT space telescope; solar panels for various satellites including the University of Toronto Institute of Aerospace Studies CanX4 and CANX5; and a data storage unit for the CAScade, Smallsat and IOnospheric Polar Explorer (CASSIOPE) satellite.

This purchase bolsters COM DEV's ability to inaugurate its own line of small satellites as discussed in my November 9th, 2009 post Canadian Component Builders "Moving Up the Food Chain" to Build Complete Satellites. 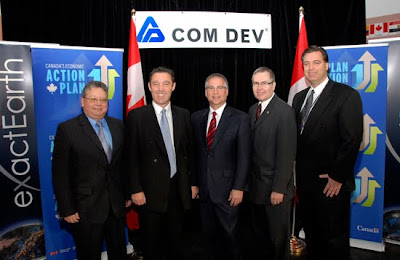 The Canadian federal government has also moved to support these activities with substantial seed financing according to the November 30th, 2009 press release Harper Government Invests In Micro-Satellite Technology on the Federal Economic Development Agency for Southern Ontario (FedDev Ontario) website, which states:


COM DEV International Ltd. will benefit from an investment of $5.2 million to create world-class micro-satellite system technology, products and services. The Honourable Gary Goodyear, Minister of State for the Federal Economic Development Agency for Southern Ontario, made the announcement at the company’s headquarters in Cambridge today. “Our government is committed to providing greater economic opportunities for the people, businesses and communities of southern Ontario,” said Minister Goodyear. “This investment will create jobs and help reinforce COM DEV International’s micro-satellite technology, which will strengthen Ontario’s position as a world leader in this growing market.”

This partnership is funded under the Southern Ontario Development Program (SODP), which will allow COM DEV to launch the first generation of its micro-satellites and establish Ontario as a world leader in this emerging industry.

It's good that the CSA is providing a forum of support for activities that the federal government is funding and private businesses like COM DEV are actively  pursuing but one wonders if this supporting role was an intentional choice.
Posted by Chuck Black