The expectation was that he'd talk about the Canadian long term space plan (LTSP), at least for those of you who read my February 16th, 2010 blog post titled Feedback on Ottawa Citizen: "Where Did That Long Term Space Plan Go?" 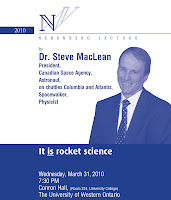 After all, by now everyone agrees that the LTSP exists, is referenced in recent Canadian Space Agency documents like the Reports on Plans and Priorities 2010-2011 and is about to be publicly released.

This perception is bolstered by the recent article by Elizabeth Howell titled "Canada’s focus in next two years: the North" on the PArs3c blog and ongoing coverage by Marc Boucher on the Spaceref.ca website.

But the LTSP hasn't been approved yet by the ruling Conservative government and so Canadian Space Agency (CSA) President Steve MacLean only went publicly on record as stating that "Space and space assets should be an essential element of government infrastructure" according to the April 22nd, 2010 article "Does Canada Have a Future in Space?" written by Mitchell Zimmer and published on Western News, the daily news site for the University of Western Ontario.

The comments came as part of the 2010 Nerenberg lecture series where MacLean was speaking on the topic "It is Rocket Science!" The article was also reprinted in a slightly different format on the Western Faculty of Science web page under the title "Astronaut says Space Research is Essential during Nerenberg Lecture,"

It's odd that MacLean wasn't more definitive about the LTSP and what the government should be doing. Perhaps there is something in the present LTSP that his political masters disprove of and wish to change before releasing  the document.

His comments also seem indicative of larger patterns emerging in the Canadian aerospace community relating to a perceived  lack of government willingness to approve or release a LTSP. This started with the March 4th, 2010 Aerospace Industries Association of Canada (AIAC) press release titled "The Canadian Aerospace Industry Reacts to the 2010 Federal Budget" which stated:


"Although the budget makes no mention of the long awaited Long-Term Space Plan, the  additional funding provided to the Canadian Space Agency to complete the Radarsat Constellation Mission is good news for the Space industry. “This measure will stimulate the Space sector and keep value-added jobs in Canada while serving government priorities,” said Claude Lajeunesse, President and CEO of the AIAC."

The comments were carried over by Canadian Space Society (CSS) President Kevin Shortt in the April 15th, 2010 Canadian Press article by Lee Ann Goodman titled "Canada likely left out in cold in U.S. plans for Mars exploration, expert says" where he is quoted as saying:


"We have no long-term space plan. We have no vision. It's partly the fault of the Canadian Space Agency, but there's been little movement from the government on what our role should be. There's no government policy at all in terms of what we should be aiming for in space."

So what we have here is three presidents, each involved with space focused activities and each mentioning that the present Canadian government really should focus a little more on our space infrastructure. One (Kevin Shortt) doesn't believe that the LTSP even exists while the other two are more cagey and publicly admit only that there should be one.

It seems that our Presidents have made their choice. But it also seems that there is something in the LTSP that the Prime Minister and our government in Ottawa disagree with. Otherwise, they'd have released it by now.

It will be interesting to find out just what specifically that is.