Our Next Real Canadian Rocket Scientists

It's interesting to note that portions of what the American Institute of Aeronautics and Astronautics (AIAA) has called one of the "Top Ten Emerging Technologies for 2009" are being designed and built, at least in part, by a small firm based out of Hackett's Cove in Nova Scotia.

Nautel, a Canadian manufacturer of AM and FM radio broadcast transmitters has been credited (along with the Ad Astra Rocket Company and NASA, where most of the preliminary research was undertaken) with commercializing the Variable Specific Impulse Magnetoplasma Rocket (or VASMR) to the point where it will be ready for orbital testing aboard the International Space Station in 2013, according to the article "New rocket engine could make trips to Mars realistic," originally posted on the Canada.com website.

The company, previously best known as the first to develop a commercially available fully solid state broadcast transmitter, can certainly point to a history of successful technology commercialization to back up the current claims.

According to the article:


A new NASA rocket engine, designed partly in Canada, raises the revolutionary possibility that a manned trip to Mars could take less than three months instead of two years.


Although the expected thrust of the system isn't high enough to overcome planetary gravity and it must be launched into orbit using conventional rockets, the continuous (if low powered) thrust of the VASIMR system allows for the build up of velocities which substantially decreases overall travel time between planets.

VASIMR is one of a dozen or so ion or "plasma type" propulsion systems currently on the drawing board, according to the Atomic Rockets list of potential engines for spaceflight which includes some basic VASIMR schematics. According to the website, one of the main advantages of the systems is it's ability to "shift gears" and "trade exhaust velocity for thrust." 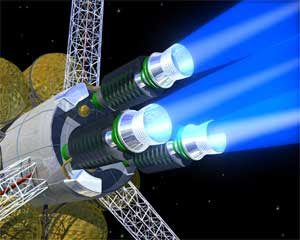 Until recently however, VASIMR was considered one of the least likely plasma propulsion systems to ever become commercially viable given that quite a few different plasma designs have been ground tested and a few (including Hall effect thrusters, arcjets and ion thrusters) are either already operational as part of existing satellite propulsion/ steering systems or else have been at least successfully tested in the space environment.

In essence, VASIMR was considered an "also ran."

Nautel's focus will be on building the high power RF amplifier for "plasma generation and subsequent acceleration in an electric spacecraft propulsion system" according to documents available on their website. Ad Astra is acting as the prime contractor for the project.
Posted by Chuck Black