Even Werner von Braun was Wrong Once in a While

It's been forty years since Apollo 11 landed on the Sea of Tranquility and it looks like we all sometimes get it wrong when it comes to predicting the future.

For example, here's Tom Lehrer, best known for the pithy, politically tinged and humorous songs he recorded in the 1950s and 60s, as he sings about one of the icons of our first great space age.


In only two and a half minutes, he manages to make fun of the space program and its military connections, nuclear Armageddon, America's sense of self-superiority, heroes in general, the Nazi's in particular and even bureaucrats. It's interesting to note how almost everything in the song is still relevant (and some of us rocket focused people might still want to consider learning "Chinese").

It is also a good reminder that those who led mankind to the Moon forty years ago were stubborn individualists and opportunists who embraced risk, endured setbacks, knew failure and were not universally loved or even terribly well respected in life but who continued forward anyway to accomplish unique and amazing things.

Here's a second example from the Atomic Rockets website (under the section devoted to space stations) to remind us that even the architects of our greatest accomplishments were not always totally correct about how things were going to turn out: 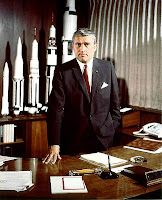 Oh, Werner von Braun had it all figured out.

In six issues of Collier's magazine he laid out a plan to send men to Luna and Mars. First you build a space ferry as a surface to orbit cargo transport (which was the great-grandfather of the Space Shuttle). Then you use it to make a space station.

And it was going to be a beauty of a space station, too. Three decks, 250 feet in diameter, and a crew of fifty. Makes the ISS look like a tin can. This outpost in space was where the Lunar expedition fleet would be constructed.

It would pay for itself as well. Meteorologists could plot the path of storms and predict the weather with unprecedented accuracy. Radio and TV signals could be transmitted all over the globe. Not to mention observing the military activities of hostile nations.

Why was this marvel never constructed? Because some clown invented the printed circuit.

Freed from the tyranny of fragile and short-lived vacuum tubes, technologists could make unmanned satellites for meteorologists, radio and TV signals, and watching hostile militaries. Such satellites could be assembled and launched at a fraction the cost of a manned station. They also did not require constant resupply missions to keep the crew alive.

We're at the beginning of our second great space age and many are wondering what it will turn out to be like, who will end up as our next generation of heroes and what they'll be remembered for.

Here are a few ideas on areas to focus from Canadians and others participating in the 2006 IAC roundtable on Major Space Markets in the Next 20 years and the Corporate Approach for Success.

The panel, moderated by Virendra Jha (then VP Science, Technology and Programs for the Canadian Space Agency) also included Mag Iskander (then Executive VP and General Manager Space Missions for Macdonald Dettwiler and Associates) and quite a few other major figures in aerospace so it's amusing to note how the participants each act amazed at the things that have happened over the last twenty years, then marvel at how most of it was unexpected but then state unequivocally that the market has likely stabilized and will now remain essentially the same (with one or two predictable exceptions which are logical progressions of existing trends).

Of course, they haven't been entirely correct.

The Augustine Committee, the British Space Innovation Growth Team and the MacLean team building our Canadian long term space plan might want to take note of this and then reflect on the earlier experiences of Werner von Braun.