A Listing of Canadian Satellite Launches

The United States and Canada partnered together on early Canadian space missions and part of what the US brought to the table was their launch capabilities.

This historic partnership, while probably the main thing that allowed Canada to become a major space player in the 1960’s has been strained by various events over the last fifteen years but still continues with Canada's astronauts launching on the space shuttle for missions to the International Space Station.

Here’s a partial list of Canadian government satellite launches (going back to the 1960’s) including some information on the launch provider and the rocket used.

The list doesn’t include Telesat launches (13 Anik satellites, the 3 Nimiq satellites, M-Sat 1 and maybe one or two others), the various COSPAS/ SARSAT satellites (Search and Rescue Satellite-Aided Tracking) launched in partnership with the other signatories to the Cospas-Sarsat International Programme Agreement or the Can-X series from the University of Toronto, Institute of Aerospace Studies (UTIAS).

But the list does include the following:
So while the partnership endures, a quick look at the above data seems to indicate that Canada is moving away from our traditional close reliance on the US space program (at least for our launch vehicles). 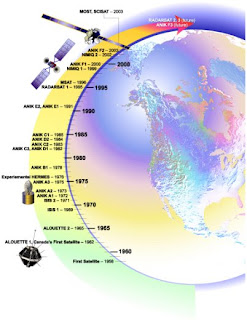 If we include the various Telesat satellites (with a wide range of US and other launchers being used) and the multiple UTIAS microsats (which use almost entirely non-US launchers) then we must conclude that Canadian satellite launches are not tightly tied to US organizations or corporations. The COSPAS/ SARSAT launches were a Canada US partnership with the participation of France and the old Soviet Union.

As for our manned space program, even the CSA is promoting a tourist being launched through the Russian Federal Space Agency so they do seem to be at least considering their options for moving forward when the shuttle is retired.

And this is as it certainly should be given that news sources like Space Politics are running articles on the Augustine Committee indicating that there is a sweeping reassessment of virtually all aspects of the US civilian space program presently underway.

Maybe the CSA (certainly aware of the policy debate down south) is hedging their bets and expanding their capabilities outside of the traditional NASA channels for both manned spaceflight and unmanned satellite launches.
Posted by Chuck Black