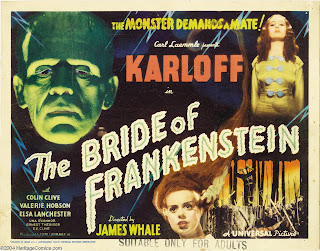 Like one of those classic monster movie sequels from the 1930's, which kept rearranging and recycling the creativity of the original in order to maximize box office receipts, traditional rocket companies are in the midst of recombining and reorganizing themselves for much the same reasons.

The latest of these is Sacramento based Aerojet Rocketdyne, a rocket and missile propulsion manufacturer owned by Gencorp (which used to be the General Tire and Rubber Company) and formed from the merger of Aerojet and Pratt & Whitney Rocketdyne.

As outlined in the June 2nd, 2012 blog post "Requiem for a Heavyweight RocketDyne," the original plan was to build a company able to compete with low cost newspace upstart Space Exploration Technologies (SpaceX).

Unfortunately, that plan seems to have fallen by the wayside. As outlined in in the June 24th, 2013 Space.com article "Aerospace Merger Means Big Savings for U.S. Government, Company Says," the new firm is now being pitched as simply a cost effective merger.

The article quoted Aerojet Rocketdyne president and CEO Warren Boley as stating he made the promise to cut up to $1Bln in anticipated government procurement costs, "in order to help achieve the endorsement of the Pentagon as officials sought approval for the merger, which was finalized on June 14th."

But the Space.com article didn't go into a lot of detail about how this money is going to be saved although it did discuss a variety of options relating to the Russian built NK-33 rocket engines. Originally designed and manufactured in the late 1960s and early 1970s by the Kuznetsov Design Bureau, the remaining examples to this engine are currently stockpiled for use in a variety of potential Aerojet Rocketdyne and other projects.

Assuming that the inevitable litigation over who owns what between United Launch Alliance (ULA), which is being sued by Orbital Sciences Corporation (OSC) over who currently owns the ex-Soviet technology (and how much they can charge for it) ends up blowing over quickly, Aerojet Rocketdyne believes that the assembly line for the engines can be profitably restarted.

But that's not the core of the reason for the new firms existence. In fact, the real Aerojet Rocketdyne plan is far more prosaic.

As outlined in the June 17th, 2013 Alabama Media Group article "Paris Air Show: Aerojet Rocketdyne would bring thousands of jobs to Huntsville to build rocket engine," the actual focus of the new company is to win contracts for the Space Launch System (SLS).

SLS is not a popular program among newspace advocates and has been described by organizations like the Space Access Society (SAS), the Space Frontier Foundation (SFF) and the Planetary Society as simply a "jobs program" for NASA. It's also widely perceived as having funding requirements which will grow over time to consume funds currently allocated to other NASA projects. As well, SLS is also not expected to lower overall launch procurement costs or the cost per pound to place materials into Earth orbit.

So what is the criteria with which this new plan is being judged by?

According  to  Alabama state Senator Paul Sanford, "Madison County is home to some of the best human capital and innovative companies in the world. I'm proud to hear Aerojet Rocketdyne wants to use Huntsville as a partner to build the first new (publicly funded) American rocket engine in 35 years, which will bring thousands of new jobs."

All of which seems to indicate that the local politicians anticipate that a large jobs component will be included with any contract awarded.

With the current estimated cost of the SLS hovering around $41Bln between now and 2025 for only four 70 metric ton launches it seems perfectly reasonable that Aerojet Rocketdyne could shave one or two percent off the total cost of the overall SLS budget and still provide thousand of jobs in Huntsville and the surrounding regions.

So maybe the space advocates are right...

Oddly enough, both the current efforts underway at Aerojet Rocketdyne relating to the SLS and the Russian NK-33 rocket engine can reasonably be considered as "sequels" to earlier efforts to adapt adapt old rocket technology to new uses.

The NK-33 was originally developed to carry Soviet cosmonauts to the Moon while SLS grew out of the shuttle program (plus the follow-on but also cancelled Constellation human spaceflight program) and the perceived need to maintain shuttle era jobs and capabilities, at least until the remaining shuttle era workforce retires.

Only time will tell if the current efforts end up as more or less successful than the earlier ones.
Posted by Chuck Black