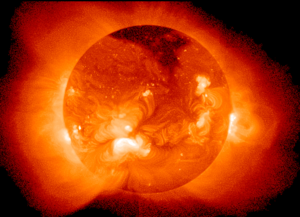 For decades, large government research programs around the world have struggled to develop nuclear fusion, a power source with world-changing potential. Decades of effort, however, has failed to achieve an economically viable fusion device. Now, a group of small firms are working toward this holy grail of energy using a smaller-scale approach.

Fusion is a type of nuclear reaction in which two or more atomic nuclei collide at very high speed and merge to form a new nucleus, releasing great amounts of energy in the process. In space, fusion reactions power stars like our Sun by the collision of hydrogen nuclei to form helium.

Fusion energy research currently consists of two main branches: inertial confinement fusion (ICF) and magnetic confinement fusion (MCF). In ICF, high-energy laser, electron or ion beams are used to compress and heat a small pellet of fuel. This compression creates shock waves that travel through the fuel to the centre, heating it so greatly that fusion reactions are triggered. In MCF, fuel is fed into a vacuum chamber where magnetic fields compress and heat it to about 150 million °C, forming a hot plasma (a gaseous state of matter).

The two largest government-funded government fusion research projects are the National Ignition Facility (NIF) in the US and the International Thermonuclear Experimental Reactor (ITER) multinational facility currently being built in southern France. The NIF creates ICF fusion with ultra-powerful lasers while the ITER will create MCF fusion via a device called a tokamak (a doughnut-shaped vacuum chamber). At both these facilities, the reactors are massive machines requiring large support staffs and budgets. Because of their large size and cost, these facilities have been years behind schedule and billions of dollars over budget. Being government projects, they are also hamstrung by politics. In the case of the ITER, its participating nations spent 10 years alone debating where the reactor would be built.

In addition to their fiscal and political issues, the devices being developed by the government programs have had questions raised concerning their utility. Owing to their physics, laser-based fusion devices and tokamaks cannot be made small and light enough to be portable, severely limiting their use. Finally, after decades of research, no fusion device has ever achieved ‘energy breakeven’. Energy breakeven describes the moment when a fusion device produces as much energy output as input. The current record-holder for energy output is the Joint European Torus (JET), which succeeded in generating 70 percent of its input power.

Given the current climate of fiscal restraint and the developmental issues with government fusion programs, the possibility of cutbacks and cancellations is high. Anticipating this, a small group of innovative companies is exploring different paths to fusion power. These firms include:
Fusion has always been sold as a panacea of limitless opportunity and for good reason.

The fuel for the process is extracted from seawater, making it both cheap and free from control by any single nation or group of nations so the advent of economically viable fusion power could radically alter both global economics and geopolitics. Fusion would also enable spacecraft propulsion at 1% to 20% of light speed, enabling easy access to anywhere in our solar system.

But that's only if one of the ideas listed above roll out successfully. The longtime joke among space enthusiasts is that fusion reactors have always been "10 to 20 years away" for the past 50 years.

Let's hope that we don't have to wait another 50 years to find out for sure.
Posted by Chuck Black