For anyone who still insists that Canadians don't launch rockets, it's worth noting that the 15th annual Rock Lake rocket launching weekend will be held in Rock Lake, Alberta from June 28th - 30th.

According to Rock Lake organizer Tim Rempel, between 50 and 75 registered rocket flyers, along with their team mates, family members and interested bystanders are expected to attend.

The event, sanctioned by the the Canadian Association of Rocketry/ L'Association Canadienne De Fuséologie (CAR-ACF) will be administered under Transport Canada regulations governing high powered rocketry in Canada.

Actually, for those who'd like to check, the history of amateur rocketry in Canada goes back to at least 1965 and the Canadian Federal government which, with the assistance of the Canadian Aeronautics and Space Institute (CASI) and the Royal Canadian Flying Clubs (RCFCA) incorporated the original Canadian Association of Rocketry (CAR) as a federal not-for-profit, self-supporting association and governing body to represent amateur/model rocketeers across Canada. 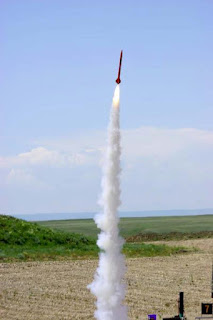 Of course, history isn't the prime motivator for Rock Lake organizers in the weeks leading up to the event.

"Rock Lake is the very best place in Canada to launch," said Rempel during a phone interview. "There are no trees or houses for miles and only one nearby stream to the south. It's essentially a perfect place for large motor flights."

Rock Lake normally hosts rocket launches in the low powered (A-D), medium powered (E-G) and high powered (H-O) categories as defined by a series of generally accepted model rocket motor classifications which depend on total impulse and average thrust. The typical Rock Lake rocket launch will reach between 30,000 and 75,000 feet.

However, the largest rocket launch at Rock Lake was a massive type O rocket, which reached the edge of space 60,000 feet up before descending back to Earth via parachute.

"We're just a bunch of friendly, passionate people who love to talk about their hobby," stated Rempel, who's also Secretary/ Treasurer of CAR-ACF and a member of the Lethbridge Rocketry Association. "But there's just something about seeing an object going that high and that fast that brings out a thrill, no matter who you are."
Posted by Chuck Black