It's the fall conference season, that traditional period from late September until late November when we attend conferences, reacquaint ourselves with colleagues, compare notes and stay up late telling terrible stories about mutual acquaintances who are probably really nice people except for one spectacular slip-up during a previous conference.

So with that in mind here are two quick promo's for conferences I'll be attending and reporting on over the next little while.

The Canadian Science Policy Conference is this October 28th to 30th in Toronto and focused on attracting academics and others with "an interest in the intersection of policy with science and technology." Speakers include Minister of State for Science and Technology Gary Goodyear, Minister for Training John Molloy and conservative populist Preston Manning.

This conference  is specifically targeted at "scientists, engineers, policymakers, industrial R&D managers, association officials, government grant recipients, students, science diplomats, government affairs specialists, public affairs officers, science writers, and others with an interest in the intersection of policy with science and technology" according to their website.

The second conference I'll be attending is organized by the Canadian Space Society, which has just released the speaker schedule for the 2009 Canadian Space Summit at the Royal Military College in Kingston Ontario on November 20th - 22nd. 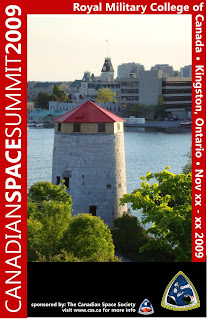 The Space Summit is expecting to attract a roster of professionals, academics, government officials and enthusiasts interested in this year's theme of "Multi-Use Missions: Opportunities for Collaboration on Space Technologies."

But since I'm chairing the commercial track, you should also know that I'm especially looking for Canadian based aerospace and new-space focused firms interested in business opportunities related to the commercialization of basic science.

If you're attending either of these events, feel free to let me know and we can meet up for coffee and juicy stories.

I'm quite interested in stories from businesses (or even from CSA employees) involved with commercialization and technology transfer through the Canadian Space Agency, especially if you've had exposure to any of the items listed in this document on innovative technical opportunities.
Posted by Chuck Black