More VASIMR Around the Corner, Just Maybe Not For Canada

But Aethera shows indications of being a spin-off of another NS based company.

Hackets Cove NS based Nautel Ltd., has worked with Ad Astra on similar projects in the past and both Aethera senior engineer Brian Walker and Aethera senior electronic technologist Matthew Skinner were long-term Nautel employees before leaving to join Athera.

Creating a spin-off to commercialize new technology would certainly make sense, given that Nautel is a forty year old firm with an existing global business to focus on.

But some have mentioned that Aethera also shows indications of being mostly a US owned company, albeit with lots of Canadian employees and a NS based primary location.

If the CSA has indeed funded a US run firm to provide a component for a US space breakthrough, that act would seem laden with irony during this period of heighted trade war concerns between Canada and the US.

Anyway, based on information provided by readers and some new research, here's the background:


Both firms were incorporated provincially in NS.

Other directors include Kirk Zwicker (another long-term Nautel employee), Tim Hardy  (until 2016, the head of engineering at Nautel), Robert Cowan (a partner at the Halifax NS based McInnes Cooper law firm, who practices corporate/ business law and specializes in technology and intellectual property issues) and Charles Andrew Schue III, the founder, president and CEO of North Billerica, MA based UrsaNAV, a specialist technology company focused around pointing, navigation, and timing (PNT) technologies and the eLoran low-frequency radionavigation system, which serves as a ground based network for PNT.


The only corporate director listed was lawyer/agent Joseph F. Jackson, a founding partner of the Richmond, VA based Roth Jackson law firm. As outlined on a Virginia SCC website entity search result for Water Spider Technologies LLC, Roth Jackson acted as the registry agent for the company formation.

But the company seems to have been run by the same Schue, who was listed as a director at Water Spider Technologies Canada Ltd.

In addition to the above change of address letter from him, on October 21st, 2016 Schue also registered the waterspidertechnologies.info website with Scottsdale AZ based GoDaddy, a publicly traded Internet domain registrar and web hosting company. He also  listed himself as the primary contact person. 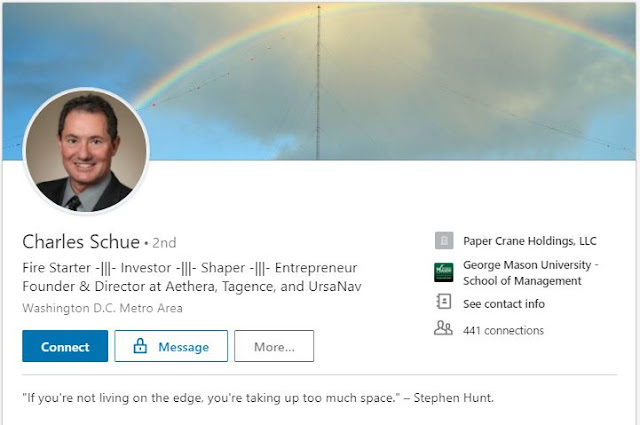 Here's the timeline of activities, based on the based on a variety of sourced documents listed above and below:
Of course, the Canadian based ex-Nautel employees have done well under Schue.

Tim Hardy left Nautel in November 2016 and is now Aethera's CTO. In March 2017, Kirk Zwicker left Nautel to become either Aethera's president and or chief operating officer (depending on which source you use).


The Washington DC based Schue also seems to be doing well.

His LinkedIn profile lists him as being "Owner, Director, Investor" of Aethera, UrsaNAV and Leesburg, VA based Tagence, a data management company which partners "with a diverse set of federal, state and local agencies to create efficient, compliant solutions that work in the government space."

Schue's LinkedIn profile also states that he "served as the "start-up" president (of Aethera) and today, I remain a majority owner, director and shareholder."

As for the CSA, the Canadian government organization which provided Aethera with the $1.5Mln CDN grant to perform subcontract work for an US based Ad Astra, here's hoping that they didn't just give the money away to another bunch of opportunistic Americans.

If the CSA or another Canadian public or private granting agency or angel investor had provided funding a little earlier in the process, perhaps there would be a Canadian in the leadership position now.


Chuck Black is the editor of the Commercial Space blog.
Posted by Chuck Black