It's worth noting that many otherwise well informed industry experts quietly hold to the belief that the "real" job of the Canadian Space Agency (CSA) president is to make sure that "no questions about the space agency or space policy" are ever asked by an opposition politician during the House of Commons Question Period.


That's why the current government encourages organizations like the Aerospace Industries Association of Canada (the AIAC, which defines itself as the industry representative for both the "aerospace" and the "space" industry) and the Canadian Science Policy Centre (the CSPC, which defines itself as a "national forum" for "issues in national science, technology, and innovation policy") to act as intermediaries in the political process by funneling concerns directly to the appropriate Federal government bureaucrats.

They do this by organizing events where politicians meet and mingle with association members to exchange information and concerns (plus gossip) in a less formal, far more casual environment which bypasses the general public, media and the political opposition.

This fall, four organizations are looking to promote their role as intermediaries and guides to Canadian space activities. Here's a quick overview of their events.

The big player in this small Canadian pond is the 2017 Canadian Aerospace Summit, which will take place in Ottawa, ON from November 7th - 8th.

The annual event is organized by the Aerospace Industries Association of Canada (AIAC), which considers itself to be "the voice of Canada’s aerospace industry," and sometimes talks about space as well.

An example of this would be the September 2016 position paper on "The Future of Canada’s Space Sector, An Engine of Innovation for Over 50 Years." And, as outlined, most recently in the October 2nd, 2017 post, "Registration is now open for AIAC's Space Day on the Hill, October 16, 2017," AIAC has also sponsored space advocacy activities. In 2012, AIAC strongly supported the David Emerson led Aerospace Review, which defined the current aerospace industry political landscape and the current structure of the CSA.

Expect traditional AIAC booster Bombardier Aerospace to also be in attendance, but relegated to a more subsidiary role focused around introducing its new best friend Airbus to Canadian subcontractors.

For a sense of what happened last year at this event, it's worth checking out the November 21st, 2016 post on "The US Military, CSeries, Roland Berger, Bell, MDA, Airships & Minister Bains at the 2016 Canadian Aerospace Summit." 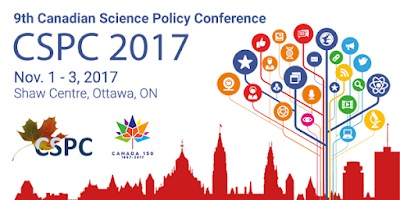 The second major player in this space is the 9th Canadian Science Policy Conference (CSPC2017), which will take place in Ottawa, ON between November 1st - 3rd.

This annual event is organized by the Canadian Science Policy Centre which, at least according to its website, "serves as an inclusive, non-partisan and national forum uniting stakeholders, strengthening dialogue, and enabling action with respect to current and emerging issues in national science, technology, and innovation policy."

From a practical perspective, this means that the organization is focused around policies which control government funded science generated through grants provided by the National Research Council (NRC), the National Sciences and Engineering Research Council (NSERC), the Social Sciences and Humanities Research Council (SSHRC), the Canadian Institute of Health Research (CIHR), the Networks of Centres of Excellence and others who act as the primary Canadian government resource for science and technology (S&T) funding. Academics, the major recipients of most of those government grants, are well represented at this event.

The focus for the event will likely be wrapped around issues brought to light in the 2017 David Naylor led Federal Review of Fundamental Science which, as outlined in the October 16th, 2017 post, "Researchers, Heal Thy Selves!," is the subject of much current controversy as the Canadian scientific community struggles over whether to accept or reject its conclusions.

For a sense of what happened at the last CSPC , it's worth checking out the November 13th, 2016 post, "Generalists, Data Miners, Lotteries, Comedy, Open Access and the Future of Science in Canada." 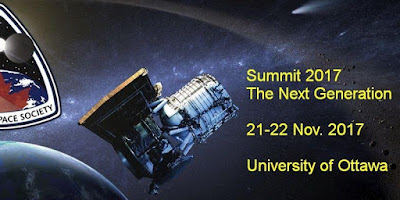 A third, far more minor event, is the 2017 Canadian Space Summit, which will also be held in Ottawa from November 21st - 22nd.

Organized by the Canadian Space Society (CSS) around the concept of "Canada’s Next Space Generation,” the event intends to "speak to Canada’s future in space and provide a spotlight on the up-and-coming leaders of Canada’s space sector."

The essence of this event is less political then academic and informational. Confirmed speakers include CSA president Sylvain Laporte, several members of the Space Advisory Board (including chair Marie Lucy Stojak and SAB member and executive director/ president of the Canadian Space Commerce Association Michelle Mendes), along with quite an interesting group of small business NewSpace companies and a couple of academics.

All in all, it's more of an introduction to the industry than the two larger conferences are able to provide. Undergrads and freshly minted NewSpace entrepreneurs are well advised to at least consider this event before moving on to the larger, more established conferences listed above.

The presence of OMX CEO Nicole Verkindt on the speaker list is a strong indication of opportunity for small business owners. OMX is an online platform which manages obligations government contractors have to invest in local economies, a policy called “offsets,” which is often quite profitable if you sell the right product. 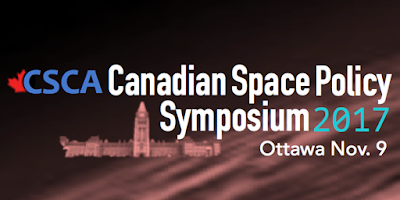 Organized around the August, 2017 report from the Federally mandated Space Advisory Board (SAB) by the Canadian Space Commerce Association (CSCA), this event is mostly an advocacy meeting for the SAB report which, as outlined in the August 25th, 2017 post, "Space Advisory Board Report: "Sound and Fury, Signifying Nothing" Except that Board Members Want to Keep their Jobs," was released incomplete and is almost wholly reliant on the existing SAB members being given a renewed mandate if its ever going to get finished.

All of which is well and good and might be even useful if there were a logical way forward.

But with no politicians listed as attending and a speaker list full of SAB members and mid-level public bureaucrats (including CSA president Sylvain Laporte (again), CSA director general of space exploration Gilles Leclerc and CSA director of communications Anna Kapiniari), the event is unlikely to do more than preach to the converted.

Even worse, CSCA president Mendes is also speaking at CSS organized Canadian Space Summit, discussed above, which suggests that most of that she has to say at the CSCA event will also be covered at the CSS event.

And the closing speaker, AIAC executive VP Iain Christie serves only as a reminder that the AIAC organized Canadian Aerospace Summit, also discussed above, at least included a couple of politicians on its speakers list.

As outlined above, at their best these sorts of events provide direct access to the politicians, but only if the politicians attend the meetings. The CSCA has not demonstrated that it can do that and, unlike the Canadian Space Summit, has no educational fall back position to justify its existence.

Of course, access to politicians doesn't necessarily lead to political change. As outlined above, it helps to be noticed during Question Period, and that leverages the attention of the public, the media and the opposition politicians.

For more on the events put on last year by both the CSS and the CSCA, check out the November 21st, 2016 post, "The 4th Canadian Satellite Design Challenge, NASA, SLS, More Urthecast, the CSA & the 2016 Canadian Space Summit."