Here's something which, over the next few weeks, will completely destroy several very, very traditional "Chinese Walls," erected decades ago within the Canadian aerospace industry. 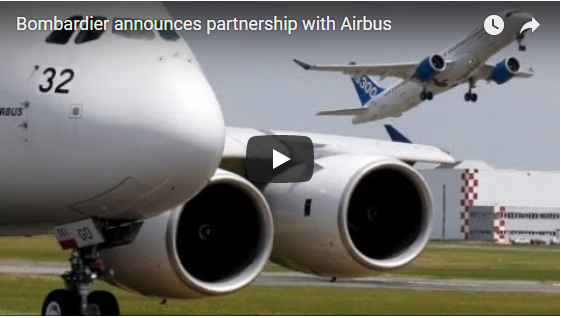 Until today, those information barriers (originally erected around business verticals to prevent exchanges that could lead to conflicts of interest with the Federal government) separated not just Canadian aerospace military and civilian providers, but also the aeronautical and space focused providers which traditionally populated the Canadian aerospace industry.

But not anymore. Airbus, a European multinational corporation that designs, manufactures, and sells civil and military products for both the aerospace and space sectors, is poised to buy a majority stake in the Bombardier C Series program.

As outlined in the October 16th, 2017 Globe and Mail post, "Bombardier teams up with Airbus to secure C Series future," Bombardier Inc. has struck an agreement "to sell control of its marquee C Series airliner program to Europe's Airbus Group SE, a bet that handing the keys to a better-financed global giant will ensure the Canadian plane maker's future in the face of relentless competition and punishingly high tariffs imposed by the United States."

As outlined most recently in the October 8th, 2017 post, "Au Revoir, Bombardier," the C Series program has been at the centre of major political and investor drama in Canada since its inception, and has driven Bombardier to the brink of bankruptcy.


According to the Globe and Mail article, the Quebec government supports the transaction with Airbus, as does the Caisse de dépôt et placement du Québec, a major Bombardier shareholder. Ottawa has also offered a preliminary endorsement of the transaction, saying "it would require review under federal investment law."

As outlined in the article:


Although Bombardier itself has not been sold, the deal is an acknowledgment that the company could not go it alone in the global market for passenger airlines.

Under the agreement, Airbus will take a 50.01-per-cent interest in the C Series limited partnership for no cash consideration.

In exchange, it will offer Bombardier's 100- to 150-seat plane its global procurement, sales, marketing and customer support expertise. Bombardier's stake will be 31% and Quebec will own about 19% when the deal is finalized.


Of course, Airbus is comprised of both military and civilian subsidiaries, as well as aerospace and space components and possesses an aggressive Canadian subsidiary which would surely like to expand its list of successful contracts. Boeing's fight with Bombardier over the C Series has already influenced the Canadian military procurement of new Boeing F-18's.

This is certainly a novel situation for Canadian industry to be in. As outlined in the October 12th, 2017 post, "Osborne Steps Down at Canadian MDA as it Responds to Questions About its US Based "Maxar" Future," US based MacDonald Dettwiler (MDA) president Howard Lance even called Airbus the only company able to compete with MDA/ MAXAR across the various business verticals.

And now both companies are well entrenched in the Great White North and able to use a wide variety of both domestic and international business resources to influence procurement decisions. Will the Federal government be strong enough to control the power these two behemoths bring to the table?

Time to queue up the explosions and stand by for action. Anything can happen now.