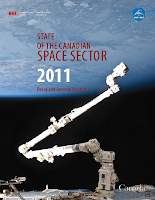 It's an interesting snapshot of the last days before BC based MacDonald Dettwiler (MDA) moved direct into the US market by purchasing Space Systems Loral; when conventional wisdom considered RADARSAT Constellation fully funded and only a little bit behind schedule/ over budget; and when the CSA could reasonably make the case that it had the in-house expertise to make policy.

But the warning signals were certainly there and even CSA President Steve MacLean described the results for 2011 as decidedly "mixed." In a preamble to the report, Dr. MacLean said:


After four years of successive and sustained growth, this year (2011) saw only modest growth pegged at 1.3% overall, with total revenues in the space sector edging to reach $3.483 Billion. Domestic revenues increased by 4.8%, while exports dropped by 2.2%. At the same time, after three years of growth, the space sector workforce stalled and shed 9% or 762 space-related positions, among them 471 highly qualified persons in 2011. 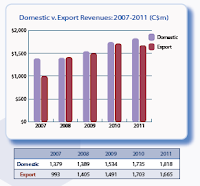 The report suggests strongly that sluggish Canadian growth in 2011 could reasonably be tied to the sluggish growth of the US market and the difficulties Canadian space focused companies have to face when attempting to enter this market.

According to the report:


Despite losing 2 percentage points in proportional share to other regions this year, the United States remains the largest market for Canadian space exports, accounting for 48%, or $807M, of the $1.665B total exports. The American market decreased by 5%, or $43M, from 2010 to 2011. Decreased revenues in the USA brought down total export figures and masked the gains made elsewhere, such as in Europe.

The report also indicated that "Despite the drop in 2011, the five year trend analysis shows a very strong export market for Canadian space-related goods and services. The CAGR (Compound Annual Growth Rate) over the past five years was 11%." 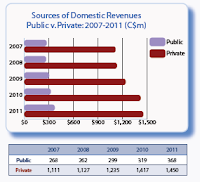 On the domestic front, revenues grew by 4.8% ($83M) between 2010 and 2011 reaching a total of $1.818B in 2011. 80% of space sector revenues derived from private (non-governmental) sources and 20% came from government. However, the government revenues, likely fueled by the 2009 Federal Economic Action Plan, were growing faster.

According to the report:

In 2011, public (government sources) increased by 16% (from $319M to $368M). The majority of the $368M that organizations received from Canadian governments was from federal sources. The Canadian Space Agency (CSA), Department of National Defence (DND), Natural Sciences and Engineering Research Council (NSERC), and Natural Resources Canada (NRCan) were among the top sources for revenue, reported by companies and universities in the annual survey.

The complete twenty two page annual report, along with previous reports going back to 1996, are available online at the CSA website.
Posted by Chuck Black