First up is the 4th Canadian Science Policy Conference (CSPC), being held in Calgary, Alberta from November 5th - 7th. Focused on "Building Bridges for the Future of Science Policy" speakers and organizers include Preston Manning, the President and CEO of the Manning Centre for Building Democracy; Gary Goodyear, the Minister of State for Science and Technology; and Eric Newell, the Chancellor Emeritus at the University of Alberta and the former CEO of Syncrude Canada. A full list of speakers is downloadable as part of the CSPC conference plan.


The CSPC has always placed a strong focus on enabling members of the science policy community to connect and collaborate on ideas and initiatives. With participation from multiple sectors and disciplines within government, academia and the business sector, the conference atmosphere encourages depth of insight and collaboration between participants in all stages of their political, professional or scientific careers

Second up is the 2012 Canadian Space Summit, the 14th annual conference of the Canadian Space Society (CSS), which will be held in the Centre for Planetary Science and Exploration at Western University in London ON, from November 14th - 16th. 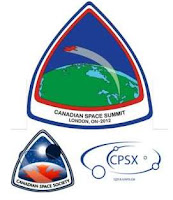 But the most interesting presentations (at least from the outlines in the Canadian Space Summit Advanced Program) look to be part of the Friday morning sessions focused around "Space Exploration on a Shoestring Budget." Included are presentations from Pete Worden, the Director of the NASA Ames Research Center; Henry Spencer, the well known Canadian computer programmer and space enthusiast; and Kieran A Carroll, one of the founding directors of the CSS who also acted as chief engineer for the Microvariability and Oscillations of STars telescope (MOST) and is currently developing new technologies for the mining industry at Gedex.

The final event is the 2012 Canadian Aerospace Summit (CAS) being held in Ottawa, Ontario from December 5th - 6th. Organized by the Aerospace Industry Association of Canada (AIAC), and focused on "Bold Steps for an Exceptional Future" this event is the last chance to buttonhole AIAC executives before the Aerospace Review presents its report outlining "concrete, fiscally-neutral recommendations on how federal policies and programs can help maximize the competitiveness of Canada's aerospace and space sectors" to the Federal industry minister.

As can been discerned from these quick overviews, the CSPC is focused on science policy, the CSS has decided to concentrate on specific space science experiments and the knowledge gained from those experiments and the CAS has decided to focus on the commercialization of technology and knowledge (when they're not talking about the aviation industry).

Hopefully, at least a few people are attending each of these conferences, in order to obtain a complete picture of the real challenges facing the space systems industry.
Posted by Chuck Black