At first glance, one might find it hard to categorize science fiction author Jerry Pournelle as a "conspiracy theorist."

But advocates of the US laws relating to the International Traffic in Arms Regulations (ITAR) might want to take note that an entire series of Pournelle novels takes place in a near future society which restricts the development of technologies that can be used in warfare.

Since even pillows can be used to smother opponents, this state of affairs eventually halts progress and improvement for pretty much everything.

Which is bad, although the stories themselves are very, very good.

Beginning with the 1971 Analog Magazine serialization titled "A Spaceship for the King," which was later expanded out into the 1981 novel "King David's Spaceship," Pournelle and his co-authors (Larry Niven and S. M. Stirling) created an alternative Earth where a transnational bureaucracy (the CoDominium), originally designed to facilitate relations between the United States of America and a revived Union of Soviet Socialist Republics, ends up controlling Earth and its resulting interstellar empire. 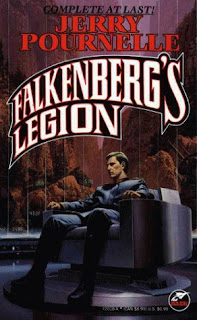 To maintain their rule, the CoDominium routinely suppresses all scientific research and development. Scientists are overtly censored, spied upon, and can even be deported off Earth.

More covertly, public sources of information in the CoDominium universe are contaminated with false data and confused by the encouragement of contradictory rules and regulations for disparate organizations which proliferate to encourage the division of knowledge into increasingly smaller, unconnected and useless sub-specialties.

The end result in the CoDominium universe is that progress halts (which makes for a series of pretty good stories related to the mercenaries of Falkenburg's Legion), then collapses until a more progressive civilization takes hold (as outlined in the classic novel "The Mote in God's Eye").

While surely none of this has any direct relevance for the real world, it's important to note that Pournelle's wikipedia bio references stints of political activism (as research director for the 1969 mayoral campaign of Los Angeles Mayor Sam Yorty and as contributor to the US Strategic Defense Initiative sections of Ronald Reagan's 1983 State of the Union Address), personal friendships with major political figures and long periods of aerospace industry employment on top secret projects for Boeing, the Aerospace Corporation, and the North American Rockwell Space Division. 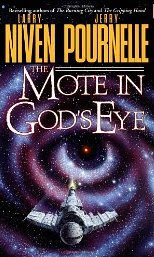 It also includes a version of Pournelle's "Iron Law of Bureaucracy" which states that:

Examples in education would be teachers who work and sacrifice to teach children, vs. union representatives who work to protect any teacher including the most incompetent.

As the US moves forward with ITAR reform, the creation of Federal Aviation Administration (FAA) regulations governing commercial spaceflight and the development of safety principals appropriate to the space tourism industry, it might it be useful to remember this law and some of the other writings of Jerry Pournelle.

Even if much of his work, sounds ever so slightly, like a "conspiracy theory."
Posted by Chuck Black