Canada Gets a New Open-Air Planetarium

National Geographic has partnered with Netherlands-based augmented reality (AR) provider Aryzon to create an open-air planetarium in Quebec, using AR to project images into the night sky for an unorthodox take on astronomy. 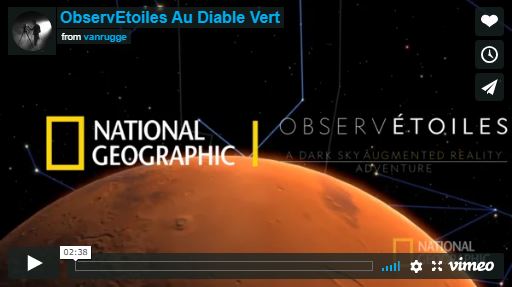 Some AR devices (such as Microsoft’s Hololens and Google’s ill-fated Google Glass) project information onto glass lenses in headsets. Others, such as the hype-laden Magic Leap or Intel’s Vaunt, use low-power lasers to project information directly onto a person’s retinas.

Au Diable Vert was recently certified as Quebec's second ‘Dark Sky Reserve’ by the International Dark Sky Association, one of only 14 such sites around the world. The IDSA is a US-based non-profit group seeking to combat ‘light pollution,’ human-generated light which advocates claim impedes astronomy, wastes energy and disrupts ecosystems as well as human biological rythms.


Opened on June 23rd, ObservEtoiles allows up to 180 visitors to observe the night sky with a digital overlay showing the names of the constellations, stars and planets.

During each two-hour show, guests are seated 304m above sea level in a mountain-side amphitheatre specially-built for ObservEtoile. The space, created by Lakeville, MN based Arena Comfort Products, is equipped with heated seats, enabling the facility to be used in all weather conditions.

Using Aryzon AR headsets, visitors can observe the stars and planets digitally overlaid with a selection of 17th-century illustrations of the constellations without obstructing their line of sight.

After the show, users may keep the headset (minus the smartphone) and use the Star Chart app to explore the stars from home.


ObservEtoiles is narrated by Andrew Fazekas AKA the ‘Night Sky Guy,’ a science writer, broadcaster, and lecturer who regularly contributes to National Geographic and The Weather Network. He is also a consultant to the Canadian Space Agency (CSA).

Astronomy has traditionally required a certain ruggedness; long hours spent at night amid heat, cold and insects. Modern tech has now made it a more pleasant experience for all.

Brian Orlotti is a network operator at the Ontario Research and Innovation Optical Network (ORION), a not-for-profit network service provider to the education and research sectors.
Posted by Chuck Black