Part Five: So You Want to be a Space Advocate? 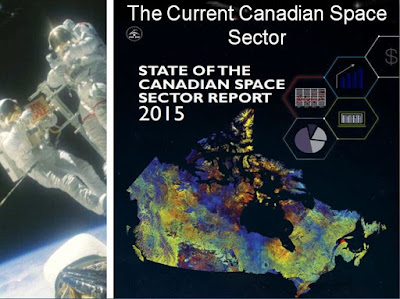 
As outlined in the executive summary of the 2015 State of the Canadian Space Sector Report, "in 2015, total revenues in the Canadian space sector totaled $5.3Bln CDN, representing a slight decrease overall of 1.6%, or $85Mln CDN, year-over-year. The average annual growth rate of the space sector over the last five years (2010–2015) is relatively flat at 0.4%." [i]

Essentially, this meant that the Canadian space sector spent the period between 2010 - 2015 in a five year slump, although the the Canadian revenues were in line with the revenues reported by the same activities in the international marketplace. [ii]


In a surprise finding, the report concluded that university and research centre revenues amounted to only $125Mln CDN in 2015, or only 2.4% of the total revenue measured, although six universities were included in the list of Canada’s top 30 space organizations.

According to the report, while the academics didn't drive a lot of the revenue, they did compose a substantial proportion of the workforce:


Academic organizations contribute 20% of the total space sector workforce with 1,997 full-time equivalents (or FTEs, the standard measurement of labour requirements in government), of which 55% are highly qualified personnel (HQP) such as engineers, scientists and technicians.

An additional 40% of the university and research centre workforce is comprised of students, mostly at the graduate level, who are in receipt of wages or a stipend from their university for work as research assistants, teaching assistants, or other employee-type situations.

The Canadian space workforce totaled 9,927 space-related FTEs in 2015, according to the report. [iv]

The general consensus until now has been that Canadian academics, with funding from government departments such as the Canadian Space Agency (CSA), the National Research Council (NRC) and others, have essentially drives the space industry to focus on the pursuit of scientific knowledge. But even at 20% of the total space sector workforce, the academic community doesn't dominate the industry the way many might expect.

Therefore, the general consensus is almost certainly in error, even as such perceptions have been bolstered by recent books, including Canada’s 50 Years in Space: The COSPAR Anniversary (by Gordon Shepherd and Agnes Kruchio) and Canada in Space (by Chris Gainor). Both books focused more on Canada's scientific contributions than on the larger political and economic machinations which led to those scientific successes.


Since the space advocacy groups attempting to drive the current conversation on Canada's future in space are, in the main, composed of student and academic focused organizations either acting independently or serving as conduits for academic interests, the true state of Canada's space industry must come as a surprise to many of them.

We'll discuss those advocacy groups in the next posting in this series.

An updated version of this series will be presented at the 18th Astronautics Conference of the Canadian Aeronautics and Space Institute ( CASI ASTRO 18), which will be held from May 15th - 17th in Quebec City, PQ.

Last: Why the Activism of the 1970's US Pro-Space Movement Didn't Work, in Part Four of "So You Want to be a Space Advocate."

Next Week: Canadian Advocacy Groups, as Part Six of "So You Want to be a Space Advocate." continues!