The 1980's, Reagan, Space Station Freedom and the Debate Over National Needs vs. International Partnerships

This paper, first presented at the 65th International Astronautical Congress, which was held in Toronto, Ontario from September 29th - October 3rd, 2014, is a brief history of the Canadian space program, written by two of the major participants.

In January 1984, in his State of the Union address, US President Ronald Reagan directed NASA “to develop a permanently manned space station and do it within a decade.”

The motives behind the announcement were many, but one of the important objectives was to use space once again (reminiscent of the Apollo Program) as a measure of the free world’s superiority over the Soviet Union which already had a space station in orbit called Sayut and was well on its way to launching the Mir space station. The Russians were also allowing astronauts from East Bloc countries to fly on Russian rockets to the Russian space station.

To top this, the US needed to have significant international participation in their space station. And so, President Reagan also said that “NASA will invite other countries to participate so we can strengthen peace, build prosperity and expand freedom to all who share our goals.”

He designated James Beggs the Administrator of NASA as a Special Ambassador and had him meet with the appropriate officials in Europe, Japan and Canada in 1984. 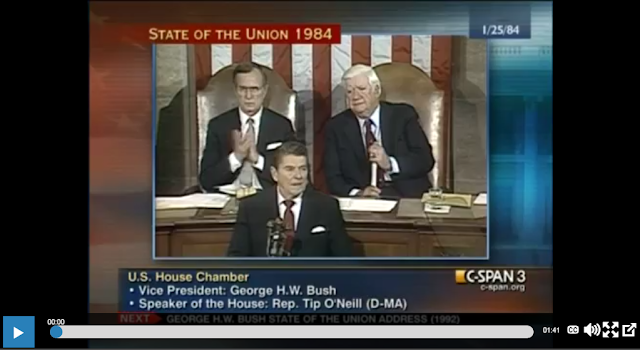 President Reagan raised the space station at the London G7 Summit in June 1984 and the resulting declaration endorsed the US space station initiative and included the phrase: “In that context each of our countries will consider carefully the generous and thoughtful invitation received from the President of the United States to other Summit countries to participate in the development of such a station by the United States.” This declaration committed Canada to consider participation in space station and to have an answer before the next Summit meeting in a year’s time.

The US invitation to participate in space station came at a time when Canadian officials in the Interdepartmental Committee on Space (ICS) were struggling with Canada’s next space plan. On the table at the time were two programs that had already received preliminary approval and initial financing – Mobile Satellite (MSAT), from the Department of Communications (DOC) and RADARSAT, from the Department of Energy Mines and Resources (DEMR).

Having arrived as a Heads of Government initiative, Canadian participation in space station was now added to this mix. Each of these programs would entail substantial new resources and the government was expecting the ICS to rank their relative priority. The debate raged at the officials’ level pitching adherents to the policy that Canada should use space to meet national needs (e.g. MSAT and RADARSAT) against those who recognized that space station would become the world’s major space initiative and if Canada was to be a full member of the G7, we had to participate.

Early in 1985, the government agreed in principle to participate in the space station and an MOU was signed with NASA. During 1985 extensive discussions with NASA ensued which resulted in agreement that the Canadian contribution would be the Mobile Servicing Centre (a complex system of robots for constructing and servicing the space station based on the successful Canadarm technology)


Canada’s commitment to participate in the space station was announced at the Shamrock Summit between Prime Minister Mulroney and President Reagan in March 1986. Thus, just two years after the initial invitation, participation in space station became Canada’s largest space program by far.

Graham Gibbs represented the Canadian space program for twenty-two years, the final seven as Canada’s first counselor for (US) space affairs based at the Canadian Embassy in Washington, DC.

He is the author of "Five Ages of Canada - A HISTORY from Our First Peoples to Confederation."

He currently serves on the board of directors of Vancouver, BC based UrtheCast and as a member of the Federal government Space Advisory Board.

Next Week: "Long-Term Space Plan I, a National Space Agency, RADARSAT, Centralization and the Dramatic Increase in Government Space Expenditures," as part eight of "A History of the Canadian Space Program: Policies & Lessons Learned Coping with Modest Budgets," continues.
Posted by Chuck Black