Part Three: So You Want to be a Space Advocate?

Varying the Characters and Narrative to Move the Story Forward 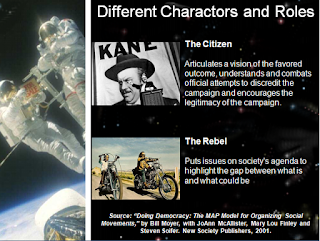 Its thesis is that successful advocacy requires:
The question of whether or not those three conditions apply in our current aerospace and space environment is open for debate.

The only real difference between a storyteller and an advocate (or any other type of sales-person) is that an advocate uses a “call to action” to support the goals of the advocacy and encourage people to move from awareness towards crafting a solution.

But the requirements to facilitate advocacy goals and the tone and texture of the stories needed to move an advocacy campaign forward tend to change in subtle ways over time.


One of the best chronicles of these subtle changes is “Doing Democracy: The MAP Model for Organizing Social Movements.” [i]

The key to the book is its postulation of an overarching methodology which both describes how social activism works and acts as a score-sheet to define the success of any specific campaign. 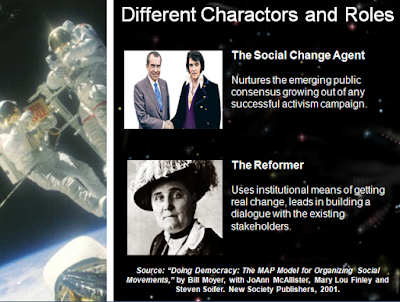 According to MAP, the four roles an activist needs to cultivate include:
It’s worth noting that the first two of the roles focus mainly on ideas, while the second two focus on the actions required to turn the ideas into lasting changes.


The MAP also defines eight distinct stages to be passed through in the typical activist campaign. They are:
The book also includes sections on democracy, power, power-holder strategy and the typical strategies used by movements advocating for social change. It even compares the MAP strategy to “nine popular models of social movements that are taught at universities.”

This suggests that there are a great many ways to define and categorize the success of activists and movements. [iv] Space activists and advocates would certainly be well served by learning more about them and utilizing their concepts in space focused advocacy campaigns.

Now that we've formulated a theoretical base to understand activism, it's time to move on to some practical examples relevant to space activists. This will be the subject of our next post.

Last Week: Defining Advocacy in Part Two of of "So You Want to be a Space Advocate."

Next Week: Why the Activism of the 1970's US Pro-Space Movement Didn't Work, as Part Four of "So You Want to be a Space Advocate" continues!
Posted by Chuck Black