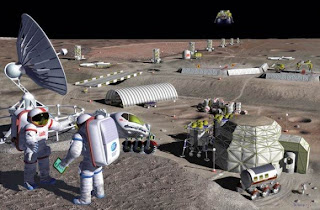 According to the April 19th,2012 Parabolic Arc article "New Study Says Asteroid Retrieval and Mining Feasible With Existing and Near-Term Technologies," the door is now wide open for the use of asteroids and other space resources as raw materials for manufacturing.

There is even public interest in starting up a company to take advantage of this research (and several deep pocketed investors looking for the best return on their investments). Take for example, this recent interview with X-Prize Foundation Founder/ Chairman Peter Diamandis.

But whatever public announcement ends up being made in Seattle on Tuesday by Diamandis and his associates, which include billionaire space tourist Charles Simonyi, filmmaker James Cameron and Google founder Larry Page, it's worth keeping in mind that this is only the very beginning of our next great space age.

Besides, according to author Rick Robinson in his November 10th, 2010 post on the Rocketpunk Manifesto website titled "Searching for McGuffanite" resource extraction is an "economic monoculture" which, like other monocultures, does not support a rich ecosystem.

According to Robinson, while mining has often been a perfectly reasonable mechanism to get people to travel to the most "god forsaken places" there will be no rush of small, independent space miners similar to what happened during the California Gold Rush of 1848–55 or the Canadian Klondike Gold Rush of 1896–99.
Instead, Robinson foresees the repeating of a pattern more common to a far earlier era, where large and monolithic firms like the Hudson's Bay Company (incorporated by English royal charter in 1670 to control the fur trade in British owned North America) and the Dutch East Indian Company (established in 1602, when the States-General of the Netherlands granted a 21-year monopoly to carry out colonial activities in Asia) obtained direct, physical control over huge landmasses in order to engage in monopolistic, economic activities. He believes that:


...there will be some very big consortium formed, or a handful of them, probably with more than cozy relationships with existing national or para-national space agencies. A very focused program will develop the technology to do one thing: (for example) go to the rings of Saturn, extract McGuffinite, and bring the stuff back to Earth. This effort will not go anywhere or do anything else...

And once in place, beyond Earth orbit the mining operation may scarcely interact with other space activity. Mining transports headed for the Rings do not stop off at Mars or Titan. The experience of developing countries is that resource extraction infrastructure is not very helpful. The rail line runs from a seaport to the mine, and even the seaport is chosen for access to the mine, not its potential as a general trade entrepot.

Oddly enough, this is pretty much what happened for the Hudson's Bay Company (HBC), the Dutch East Indian Company and quite a few other  large, monopolistic firms which ended up making their founders and Directors a great deal of money but never really opened up the territories under their control in any substantive way.

In the case of the HBC, North American settlement and the opening up of trade generally coincided with loss of the HBC trading monopoly and was therefore generally discouraged. The final act was in 1870, when the British government abolished the remaining HBC monopoly over trade in various territorial possessions then being incorporated into the new Dominion of Canada.

The Dutch East India Company payed an 18% annual dividend to its shareholders for nearly 200 years (which compares well to a modern company like ExxonMobil, which has paid out dividends to shareholders at an average annual rate of only 5.7% over the last 29 years) but was eventually consumed by corruption and formally dissolved in 1800. Its territories, possessions and debt were taken over by the government of the Dutch Batavian Republic, which is today a part of Indonesia.

It will be interesting to see how space advocates (especially those who feel that the next great goal of space activities is for colonization) react to the expected Tuesday announcement by Mr. Diamandis, Mr. Simonyi and their colleagues on the specifics of their next space venture.

There is, of course, a great deal of money to be made gathering resources from space. But if historical patterns hold true, this is only the first, tentative step in our next great space age.
Posted by Chuck Black