Part Two: So You Want to be a Space Advocate? 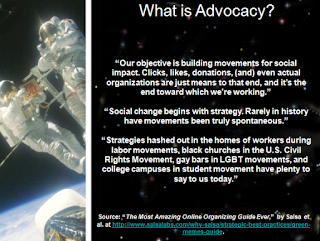 It’s worth noting that advocacy, a “political process by an individual or group which aims to influence public-policy and resource allocation decisions within political, economic, and social systems and institutions,” is still advocacy whether or not the final goal being worked towards relates to space activism, civil or political rights, environmentalism, building a museum collection or some other outcome. [i]

The methodologies used to “influence public policy and resource allocation decisions,” or set up a new curriculum at a local community college are also more than sufficient to encourage the exploration of the high frontier. Even better, these methodologies are also generally pretty standard and reasonably well understood.


An example of current advocacy methodologies is “The Most Amazing Online Organizing Guide EVER!” Compiled by Green Memes, a US based environmental justice activist organization, the booklet bills itself as “a practical handbook for those who want to leverage social media for social change.” [ii]

And while there are no rocket ships or references to Buzz Aldrin on the cover, the booklet contains a surprisingly large number of pretty obvious observations and suggestions of use by advocates of any stripe. Examples include:
But the booklet doesn’t just regurgitate platitudes. It’s thesis is that the first step in any successful advocacy is the crafting a compelling narrative which outlines the problem, drives reactions for change and paves the way for solutions. As outlined in the booklet:


What do you remember about the civil rights movement in the 60s in the South? Really, what’s the first thing that comes to mind?

Now, I’m going to take a gamble here and say that the first thing you remembered when you read the question above was a story about someone, or a group of people, doing something brave—rather than voter registration statistics, or desegregation rates or the like. I suspect you remember Rosa Parks refusing to give up a seat, students being harassed as they integrated a lunch counter, Freedom Riders making their way across the South, or Martin Luther King Jr. at the pulpit.

That’s because stories are the essence of human communication and relationships, containing our collective memory and values. That makes them a core part of movement building.

Personal stories aren’t just how we remember successful social movements —they’re the connective tissue that links a movement together. Stories are both the inspiration that brings people to a movement, and the substance of the relationships that hold people to it once they’ve joined. Telling the stories of the people you work with is one of the most important ways you can use social media to strengthen your organizing.” [v]

In essence, the narrative is the glue which ties any specific advocacy together into a coherent whole. And space focused activities over the last 50 years have also been crafted into compelling stories. Examples include:
Oddly enough, most of those compelling narratives were written by historians who weren't so much concerned with changing the future as they were with chronicling the past. But an advocate would want to drive this compelling narrative forward in real time towards real change.

How that happens, will be the subject of the next post.


[i] “The Most Amazing Online Organizing Guide Ever,” Edited by Megan Kelley & Joe Solomon at http://www.salsalabs.com/why-salsa/strategic-best-practices/green-memes-guide. Accessed August 29th, 2016.

[vi] “2001: The Heritage and Legacy of the Space Odyssey” by Frederick I Ordway III and Robert Godwin. Griffen Media, 2010.

[vii] “An Astronaut's Guide to Life on Earth” by Chris Hadfield. Random House of Canada, 2013.

[ix] “Marketing the Moon: The Selling of the Apollo Lunar Program” by David Meerman Scott and Richard Jurek. The MIT Press, 2014.

[x] “Sex and Rockets” by John Carter with an introduction by Robert Anton Wilson. Feral House, 2005.

Last Week: An Introduction to our Changing World as Part One of of "So You Want to be a Space Advocate" begins!

Next Week: Varying the Characters and Narrative to Move the Story Forward as Part Three of "So You Want to be a Space Advocate" continues!
Posted by Chuck Black