Part One: So You Want to be a Space Advocate?

An Introduction to our Changing World 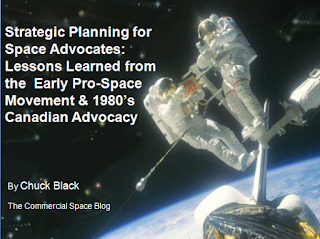 It's a platitude that space exploration is at a crossroads and politicians are struggling to keep up with the changing situation.

As outlined in the June 13th, 2016 post,"Government Announces Comprehensive Review of Canadian Science," Federal innovation Minister Navdeep Bains, the politician responsible for the Canadian Space Agency (CSA), the National Research Council (NRC), the Natural Sciences and Engineering Research Council (NSERC) and quite a number of other science and technology funding agencies, is currently in the midst of "an independent review of billions of dollars of federal funding for science and academics" which is expected to report "before the end of this year." [i]

As outlined in the August 3rd, 2016 Toronto Star post, "Federal ministers are hell-bent on consulting you: Paul Wells," Minister Bains isn't the only Federal politician interested in riding the current wave of change. As outlined in the post, "if you run into a Liberal MP this summer, you will probably not escape without being asked for your input on something or other." [ii]

But these constant changes and upheavals are nothing new.


As outlined in the July 21st, 2009 post "Even Werner Von Braun was Wrong Once in a While," those who led mankind to the Moon forty-five years ago were stubborn individualists and opportunists who embraced risk, endured setbacks, knew failure and were not universally loved or even terribly well respected in life.(iii)

In essence, they disagreed often and made many mistakes, which usually led to more disagreements. This is surprising, especially when you remember that the legacy of the early space age is one of accomplishments, not infighting.

But a legacy of accomplishment might not be an accurate representation of the current generation of space leaders. An example would be the panelists at the “2006 International Astronautical Federation (IAF) Roundtable on Major Space Markets in the Next 20 years and the Corporate Approach for Success.”(iv)

The discussion, held during the 57th International Astronautical Congress in Valencia, Spain from October 2nd - 6th, 2006, was moderated by Virendra Jha (then the VP science, technology and programs for the CSA).

Panelists included Mag Iskander (the executive VP and general manager of space missions for BC based MacDonald Dettwiler), Francois Auque (the CEO of Astrium), Pascale Sourisse (the president and CEO of Alcatel Alenia Space), Dr James Chilton (the VP of Boeing), Nicolay Sevestiyanov, (the president & general designer at ENERGIA) and Professor Sir Martin Sweeting (the CEO of Surrey Satellite Technology).(v)


However, given the pedigree of the panelists, it's amusing to note how each acts amazed at the things that have happened over the last twenty years, then marvels at how most of the changes were unexpected but then states unequivocally that the market has likely stabilized and will now remain essentially the same with one or two predictable exceptions which are logical progressions of existing trends.(vi)

Of course, those panelists haven't turned out to be anywhere near correct, despite their vast knowledge and expertise.

But while ten years perhaps provides us with the benefit of hindsight unavailable to the 2006 panel, the changes expected over the next ten years are likely to dwarf those of the previous ten.

So how can space policy experts most effectively advocate their positions and projects in this brave new world of continuous change, ongoing government reviews and commercial constraints?

Next Week: Defining Advocacy as Part Two of "So You Want to be a Space Advocate" continues!
Posted by Chuck Black