Measuring the Space "Industry" in Canada 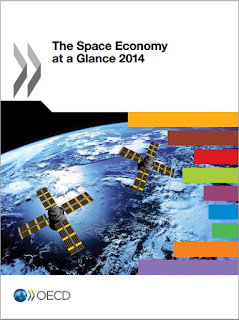 According to the Space Economy at a Glance 2014:

The ten biggest companies accounted for almost 88% of revenues and 64% of employment (Canadian Space Agency, 2013). Space manufacturing is mainly located in Ontario (more than half of the workforce) and in Quebec (19% of workforce). Some 7 993 people were employed in the space sector in 2012, an increase compared to 2011, with more than half defined as “highly” qualified’ (engineers, scientists and technicians).

Of course, the data used in the OECD publication had to come from somewhere and most of the OECD numbers were referenced from the 2012 State of the Canadian Space Sector Report, the last publicly available document in what used to be an annual Canadian Space Agency (CSA) inventory of Canadian commercial space activities. 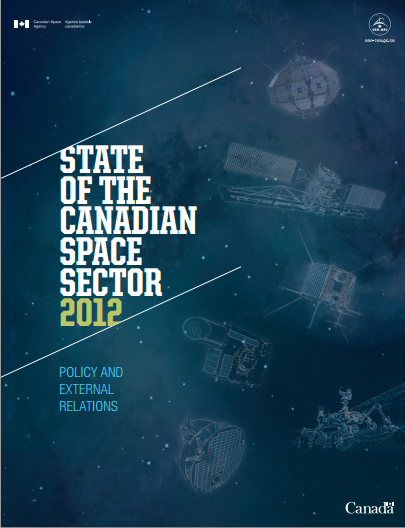 All of which suggests that there is a great deal of scope to do further research on the topic, and the generally acknowledged best way to begin this research is to explore something called the Handbook on Measuring the Space Economy.

It's also meant to be complementary to the Space Economy at a Glance, which is updated every few years and published through the same Paris, France based organization, the Organisation for Economic Co-operation and Development (OECD).

The final deliverable for that CSA contract, originally expected to be completed in January 2015 by winning bidder Euroconsult-EC, has so far not been released for public consumption.

Of course, there are others who also track the aerospace and space industry. 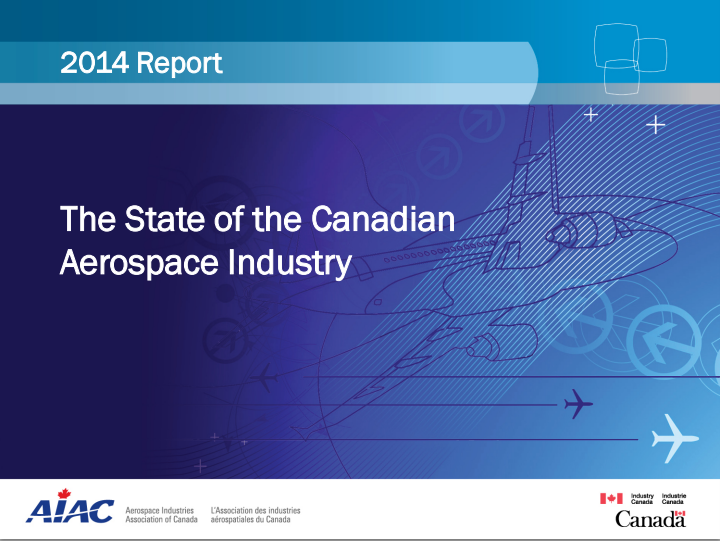 In July 2014, the Aerospace Industries Association of Canada (AIAC) and Industry Canada jointly released an 18 page document called the State of the Aerospace Industry: 2014 Report, which contained an overview of the Canadian aerospace and space industry, using updated "GDP estimates developed by Industry Canada based on different Government Statistical and Tax Agencies as well as from the Canadian Space Agency Annual Space Survey, 2014."

This new report, scarcely more than a power-point presentation and certainly far smaller than the annual CSA report it will seemingly replace, will supposedly cover the far larger and more comprehensive Canadian aerospace industry (where the space industry is a subset) and is also expected to be released annually.

The Aerospace Industries Association of Canada (AIAC) - A not-for-profit business association advocating on aerospace policy issues that have a direct impact on aerospace and space companies and jobs in Canada. Heavily involved in the November 2012 Aerospace Review, the second volume of which was focused almost entirely on the Canadian space industry. AIAC executive vice-president Iain Christie was recently elected president of the Canadian Aeronautics and Space Institute (CASI) for 2014 - 2015. The organization has also been heavily involved, in partnership with the Consortium for Research and Innovation in Aerospace in Québec (CRIAQ) with the development of the Consortium for Aerospace Research and Innovation in Canada (CARIC).

The Alberta Space Program - A listing of Alberta space imaging, science and business activities "attracting international investment" at the University of Alberta Institute for Space Science, Exploration and Technology (ISSET). Contains links to the Alberta government website on the provincial aerospace and defense industry which "contributes $1.3 billion in revenue annually to the provincial economy, is home to 170 aerospace and aviation companies, and employs over 6,000 highly skilled Albertans."

The Canadian regional chapter of the Association of Manufacturing Excellence (AME) - A part of the larger Association of Manufacturing Excellence, with chapters across the US, the UK and Australia. Whether on Earth or in space, things still need to be manufactured and AME is the leading industry-diverse community with more than 4,000 professionals dedicated to enterprise excellence, continuous improvement, lean methodologies and kaizen techniques in manufacturing. Now, if only someone could bring them up to speed on open design concepts, 3D-printing and what's going on at places like Hacklab.TO.

The Canadian Aeronautics and Space Institute (CASI) - A nonprofit technical organization for aeronautics, space and remote sensing. The organization hosts a variety of events including the recently concluded 65th International Astronautics Congress (IAC), which was held in Toronto from September 29th - October 3rd, 2014 and the bi-annual CASI Aero and CASI Astro events.

The Canadian Aerospace Industries Capability Database - A once comprehensive listing of 60,000 Canadian aerospace businesses tracked by capabilities and expertise created over a decade ago with input from a variety of provincial and federal aerospace associations in cooperation with Industry Canada. The database was a logical follow-on to the 2002 Federal government paper on Canada's Innovation Strategy, which led over the next few years to the 2005 Canadian Aerospace Partnership (CAP), which led almost immediately to the 2005 National Aerospace and Defence Framework which was eventually superseded by the 2012 Aerospace Review, although the database remains. For those who can't follow the process without a scorecard.

The Canadian Association of Business Incubation (CABI) – Dedicated to the development of new enterprises and supporting the growth of new and emerging businesses, this organization has access to over 60+ Canadian business incubators and accelerators with a broad range of expertise.

The Canadian Association of Defense and Security Industries (CADSI) – The “voice” the Canadian defense and security industries and organizers of the annual CANSEC defence trade shows.

The Canadian Start-up Financing Landscape – An annual assessment from start-up marketer Marc Evans, on where to go to get funding and support for your Canadian start-up. The list is divided up into angel investors, business incubators and accelerators, plus seed, series A and series B funding sources.

The Canadian Venture Capital & Private Equity Association (CVCA) – With over 2000 members with over $105 billion in capital under management, the CVCA represents the majority of private equity companies in Canada. Focused on venture capital (investment in early stage, mostly technology based companies), mezzanine financing (subordinated debt or preferred stock with an equity kicker) and buyout funding (risk investment in established private or publicly listed firms that are undergoing a fundamental change in operations or strategy). 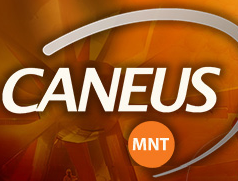 The Center for Space Entrepreneurship (eSpace) – Although not a Canadian example, this Boulder, CO based 501(c)(3) non-profit organization supports the creation and development of entrepreneurial space companies, the commercialization of the technologies they create, and the workforce to fuel their growth. Well worth using as a model for further Canadian development.

The Commercial SpaceFlight Federation (CSF) – Another non-Canadian example worth emulating. The 40 businesses and organizations who are members of the CSF provide a comprehensive snapshot of the emerging international NewSpace industry. Canadian members include MacDonald Dettwiler (MDA) and others.

The Consortium for Aerospace Research and Innovation in Canada (CARIC) – CARIC is a joint initiative of the Aerospace Industries Association of Canada (AIAC) and the Consortium for Research and Innovation in Aerospace in Québec (CRIAQ) to create "a national research and technology network that unites stakeholders from industry, universities, colleges and research institutions" across Canada. Uses the CRIAQ, funding and collaborative model.

Deltion Innovations – Billed as "Sudbury's first aerospace company" and focused on the design and fabrication of terrestrial and space mining systems, the organization also helps to organize the annual Planetary and Terrestrial Mining Sciences Symposium. Originally part of the Northern Centre for Advanced Technology (NORCAT). 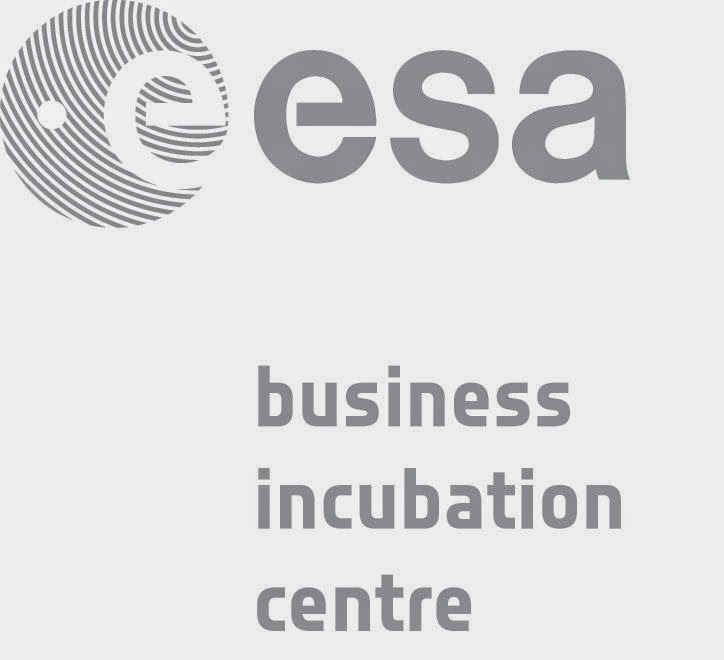 The Intellectual Property Institute of Canada (IPEC) – A national association comprised of over 1,700 members from Canada and abroad. Members include patent agents, trade-mark agents and lawyers specializing in intellectual property. This is the first stop on the line if you're a rocket scientist looking to protect your trade, and any other of the secrets you might need, to run a business.

The Information Technology Association of Canada (ITAC) - Not especially space related (unless you're familiar with the partnerships developed in Great Britain between the IT and space advocacy communities, which led to the creation of the UK Space Agency in 2010), but heavily involved in much the same issues of government procurement, innovation and commercialization. Even better, many of the entrepreneurial leaders in the current NewSpace community (Elon Musk and Jeff Bezos, for example) started in IT. The panel chair of the 2012 Review of Federal Support to Research and Development (the "Jenkins panel," which directly effected Industry Canada (IC) and Canadian Space Agency (CSA) activities) was Tom Jenkins, then the executive chairman and chief strategy officer of Waterloo based Open Text Corporation, a member in good standing of ITAC.

Kentucky Space – Another of those international examples which ambitious Canadians need to learn more about. This US based non-profit consortium comprising the University of Kentucky, Morehead State University, the NASA Kentucky Space Grant Consortium and EPSCoR Programs plus Belcan Corporation (a Cincinnati, OH based engineering headhunting firm) is focused on the research and development issues of small entrepreneurial and commercial space solutions. Managed by the Kentucky Science and Technology Corporation. 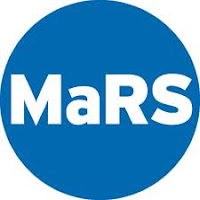 The MaRS Discovery District – A Toronto business incubator focused on the medical and IT industries but open to new ideas. Maintains the MaRS Funding Sources Directory, a listing of provincial, national and international funding sources suitable for Ontario companies in both the public and private sectors.

Mitacs – A national, not-for-profit research organization focused on building "partnerships between academia, industry, and the world – to create a more innovative Canada." Offers a suite of research and training programs "which enable companies to connect with top Canadian and international researchers." 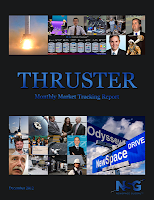 The Ontario Aerospace Council - One of several regional, not for profit associations of aerospace firms across Canada tasked with enhancing industry competitiveness. Others include Aero Montreal, the Aerospace Industry Association of British Columbia (AIABC), the Manitoba Aerospace Association and the Unmanned Vehicle Systems Canada (UVS).

The Space Angels Network – an American based network of angel investors that also accepts investors and clients from Canada and Europe. Sponsored by the Center for the Advancement for Science in Space (CASIS), Spaceflight Services (a one stop shop for manifests, certification and integration of small satellites into a network of established and emerging launch and space transportation vehicles), the Habif, Arogetti and Wynne accounting firm, SpaceNest (an Israeli based space incubator) and the Jones Day law firm. Strategic partners include the Space Foundation ( a Colorado-based nonprofit "advocate" for the global space industry), the Space Frontier Foundation, the UK based Catapult Satellite Applications Corporation, the Australian based Delta-V Space Accelerator and venture fund Gust. 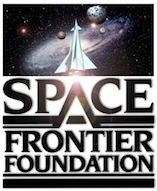 The Space Frontier Foundation - US based advocacy group which believes that the barriers to space exploration are "primarily found in the bureaucratic status-quo of the government space program," and that change must come externally, through entrepreneurship. Organizers of the annual NewSpace business plan competition.

The TechConnex Hub - Typical of efforts across Canada (although perhaps more successful), this association acts as an industry-directed hub for small and mid-size tech businesses throughout the greater Toronto area.

TheFunded.com – An online community of over 20,000 CEOs, founders and entrepreneurs who get together to discuss fundraising, rate and review angel investors and venture capitalists, and exchange ideas for strategies to grow start-up businesses. A part of the Founder Institute.