There was once a time when the Industry Minister didn't need to be in the room when his department announced the formation of two new committees to supervise ongoing activities. 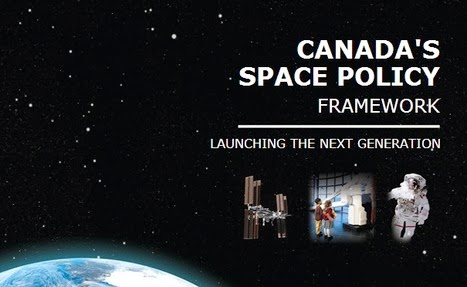 But times change and the Friday announcement from Industry Minister James Moore of the formation of two committees, one chaired by Canadian Space Agency (CSA) president Walt Natynczyk and tasked with the job of "representing the full range of stakeholders in the public and private space domain," along with a second committee, chaired by a deputy minister to review CSA "objectives and expenditures," does seem to have set off a firestorm of interest.

The committees were announced as part of the release of what the government called "Canada's Space Policy Framework," on January 7th, 2014 during a press conference at the Canadian Aviation & Space Museum. The new policy was promoted by Minister Moore as the logical follow-on to the David Emerson led Aerospace Review, the November 2012 arm's length review of the aerospace "and space" industry which was highly critical of CSA activities.

As part of the presentation, Moore also announced that Canada will invest a further $17Mln CDN into Canadian firms subcontracting work as part of the US based James Webb Space Telescope (JWST). As per the February 5th, 2014 Space.com article "NASA Chief Treads Carefully on James Webb Space Telescope Budget," the JWST has a history of massive cost over-runs and looks set for another round, so the additional Canadian money will certainly be appreciated.

In an unusual step, the opposition Federal New Democratic Party (NDP) almost immediately responded to the release of the new space policy by posting a press release on the NDP website under the title "Conservative incompetence crippling space sector." The party is expected to follow-up next week with questions in Parliament on the new policy.

The last time the NDP questioned the ruling Conservative government policies in this area was in 2008, when NDP member of parliament Peggy Nash questioned the value of allowing the proposed $1.3Bln CDN sale of BC based Macdonald Dettwiler (MDA) to US based Alliant Techsystems (ATK). That sale was eventually blocked by the Federal government over concerns relating to national sovereignty, ongoing access to sensitive RADARSAT1 and RADARSAT2 data plus issues relating to the viability of the follow-on RADARSAT Constellation mission (RCM).

But the NDP wasn't the only group with concerns. As outlined in the February 7th, 2014 Canadian Press article, "Canada Launches New Space Policy," Liberal MP Marc Garneau also has questions and said the real test is in the execution. Garneau also said he would wait and see whether “the grand words ... are actually going to turn into something positive for Canada’s space program.”

Others came out with more favorable comments. As outlined in the February 7th, 2014 Aerospace Industry Association of Canada (AIAC) press release "Aerospace industry applauds release of new Space Policy Framework,"the AIAC took the position that "the Space Policy Framework builds on both recent and historic Canadian achievements in space, particularly the recent mission led by Canadian astronaut Chris Hadfield, who became the first Canadian commander of the International Space Station (ISS) in 2013."

But of course, the real Chris Hadfield was unavailable for comment and that might just be for the best given that the actual issues here might be more related to staffing, instead of space exploration.


The externalization of outreach functions (under a committee chaired by Natynczyk), fiscal oversight and even policy making (under a second committee chaired by a deputy minister) would normally clear the way for re-assignment and lay-offs of CSA employees whose roles have been, essentially "outsourced."

Supervising those lay-offs was widely expected to be a part of Natynczyk's role when he was initially hired but the original plan seems to have been replaced with a more "incremental approach" to what is perceived to be a series of "interdepartmental staffing issues" brought to the fore as the CSA was stripped of its original role and mandate and new roles needed to be found for CSA employees.

This might end up being the real reason behind Friday's announcement and the real reason for the NDP taking what is for them a very rare public stance in this area.
Posted by Chuck Black