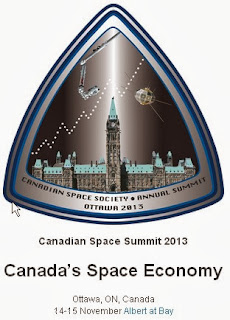 As outlined by Canadian Space Society (CSS) president Wayne Ellis, who chaired the panel discussion, the media today is technically reliant on space and telecommunications technology as a medium to get their stories and messages out to the Canadian public, as well as to people around the world.

According to Semeniuk, the media’s responsibility is to reflect what is significant for the interests of the public, and that “we need a scientifically literate media.”

He also went on to discuss the benefits of the story format used by journalists to convey messages, as well as the increasingly visual and moving picture media. However, he made sure to mention that he felt the media was lacking in scientific substance, and that Canadian space is not getting the public coverage it deserves.

According  to Semeniuk, "Chris Hadfield was a great success for Canadian and international space and media, but not that great because it did not fully publicize the rest of what Canadian space does.”

Black agreed with Semeniuk’s definition of the media’s responsibility, but went on to speak of the categorization of media stories, and the fact that he writes for a different audience.

Howell said that journalism used to be the main channel of information, but this has changed because of social media and the internet.

Firstly, it is difficult to find the important and significant news, and difficult to sort through what is to be given to the audience. Secondly, the lack of funding and inability to get the media and writers to important events greatly impacts the coverage of certain necessary topics. Finally, she felt that “Canadian news is not fully known internationally, and we need to make sure that something significant in Canada is appropriately explained to the rest of the world.”

The floor was then opened to audience questions.

When asked about the effectiveness of a single news source to provide Canadians with the important space stories, Black mentioned that there are a number of independently funded news sources in the US already doing this and Canadian coverage will likely follow down this path over time.

Seneniuk felt that change was necessary to open hidden science facilities to everyone. He also felt that Canadian scientists and science facilities must work to become less fearful of the public’s interests in their work. He said that “Canada is very clamped down, and not a healthy democracy or open society. Scientists can’t talk to the public or media directly, and they think there is nothing to be gained from science talking to the press.”

The final audience question was about the effectiveness of a lot of coverage in order to accomplish scientific goals in Canada, to which Howell replied “if you shine more light, yes you get more attention.”