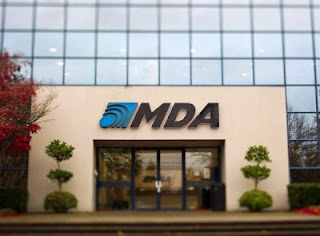 According to November 6th, 2013  SpaceNews article "Canada Blocks MDA Corp. from Russian Radar Satellite Competition," the Russian government had been soliciting prospective bidders on a radar Earth observation system for the past year. MDA is currently under contract to the Canadian government to develop the three-satellite Radarsat Constellation Mission (RCM), and so was considered a likely bidder for the Russian work.

But in response to an investor’s question during the conference call, MDA CEO Dan Friedmann stated:

The Canadian’s government’s decision will likely limit the Russian competition to European firms. EADS Astrium has shown interest in the contract as a chance to expand its existing constellation of radar imaging satellites (TerraSAR-X and TanDEM-X) co-developed with the German Space Agency (DLR). DLR officials have also publicly expressed support for an Astrium bid.

Despite the radar satellite setback, Friedmann emphasized that MDA Corp. has other irons in the fire, both with Russia and other nations. MDA is responding to a Russian RFP for a communications satellite due in January and will respond to an RFI for two more commsats expected in the coming weeks. Friedmann also said that MDA is seeking to collaborate with Russia on space robotics projects. Aside from Russia, Friedmann stated that “bidding activity (for communications satellites) continues at a high level” with MDA winning five telecom satellite contracts thus far in 2013.

Email ThisBlogThis!Share to TwitterShare to FacebookShare to Pinterest
Labels: MDA