Cutting off its Nose to Spite the Face: Why ITAR is Bad for Business


The International Traffic in Arms Regulations (ITAR), the United States government rules defining the export and import of defense-related articles (such as satellite technology) on the United States munitions list (USML), is the subject of two recent news stories with consequences for Canada.


The first, as outlined in the February 12th, 2012 Parabolic Arc article "AIA: Satellite Export Rules Have Cost $20.8 Billion, Quarter Million Jobs" is that these restrictive export laws "have devastated the US satellite manufacturing industry and led to a loss of $20.8 billion in revenues and nearly 28,000 jobs annually over a 10-year period." The conclusions are part of the January 2012 report from the Aerospace Industries Association titled "Competing for Space: Satellite Export Policy and US National Security" which has been making the rounds of space focused news services over the last few weeks.

Of course, the jobs lost and the revenue shortfalls were never the core of what these rules were intended to regulate.

According to the Reuters article, the US threat is part of a "multi-year push for details on the design and components" of a telecommunications satellite that prime contractor Thales Alenia Space has labeled as free of US parts "and therefore exempt from U.S. export controls."


Unfortunately for Thales, the US disagrees and considers the satellite under discussion (a Spacebus 4000C2) as being derived from earlier versions (the Spacebus 100 - 4000B models) built using US derived knowledge and/or parts, which therefore make the current versions subject to ITAR. The US is pushing for further details into the design and components used by Thales in order to confirm that ITAR regulations weren't breached.

Of course, its always difficult to prove that something "didn't" happen and that's why this issue is likely going to drag on for quite some time.

For Canadians, the ITAR regulations are initially not that onerous when selling into the US, although it is an added level of expense and could be perceived (as outlined in my November 28th, 2011 article "Is The Space Industry Really 'Uniting in Criticism over ITAR?'") as being a barrier to trade, especially for smaller companies.

The problem for Canada occurs when a Canadian company decides it needs to find a US parts supplier. 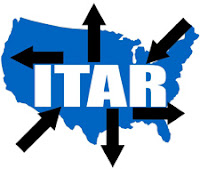 That seems to require a never-ending string of ITAR paperwork for each and every US supplier & partner. The paperwork normally delays programs because US companies simply can't exchange useful information with Canadian space systems companies until a US State Department export agreement is in place, which is a process that can take several months.

Which is why Canadian aerospace and satellite companies don't generally source parts from the US.

But its far worse for the Americans. Many small US companies simply will not deal with Canadians (for foreigners in general) because they are too small to have any ITAR trained people on staff and too well aware of the near limitless penalties ITAR can impose on every individual who may have contravened the exceptionally vague wording of the ITAR regulations.

While Thales can afford these delays (and is often supported by the French government), smaller firms without the support of national governments (and this includes any US firm presently selling into the Thales supply chain) are likely not able to take the chance.

So the small US companies don't sell products on the international market and generally stay small.

This simple fact goes a long way towards explaining why certain categories of US job losses are caused by ITAR regulations and how the current problems between Thales and the US government inhibit small firms from exporting their satellite products or selling to anyone who isn't American.

Perhaps the upcoming and expected reconciliation between ITAR and the Canadian Controlled Goods Program (CGP) will address these issues, at least for Canada, or perhaps not. The problem seems not to matter to Canadian business since we can always go elsewhere for our subcontractors.

After all, its the US that's cutting off its nose to spite the face.