This series of posts is attempting to answer some of the questions surrounding the appropriate Canadian response to the recently announced US plan to create an expanded United States Space Force. 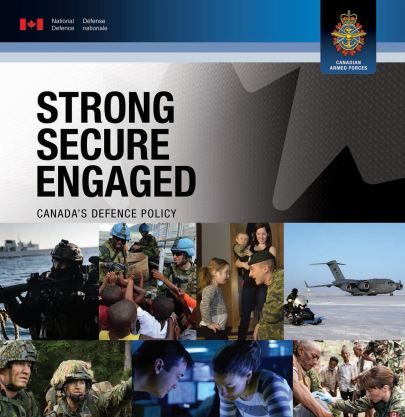 Part one ("The Axworthy Doctrine") focused on how the dissolution of the Soviet Union in the early 1990's led to a new Canadian focus on aggressive, international peacekeeping missions requiring space focused communication and surveillance capabilities of a type which Canada didn't then possess.

Part two ("The Changing Political Landscape") discussed why Canada never had a military space policy prior to 1998 by going back to the 1960's and the federal liberal party under Lester Pearson and Pierre Trudeau.

Part three ("Towards Northern Sovereignty") dealt with the changing focus of Canadian foreign policy from international peacekeeping towards northern sovereignty, a policy developed in the 1990's under then Canadian Prime Minister Jean Chrétien which also required a substantial space-focused component, and what happened when the Canadian government realized that it still didn't possess those capabilities.

Part four ("Funding an Appropriate Force") outlined Conservative Prime Prime  Minister Stephen Harper's reaction to the policies of the previous Liberal government. It would have been a great strategy, if only the Canadian government didn't keep cutting back on the budget.

Here is part five of this series.

In the run up to the 2015 Federal Election, Liberal Leader Justin Trudeau (the eldest son of Canada's fifteenth PM, Pierre Trudeau) instinctively understood that the problem with the Stephen Harper Conservative government (at least when it came to defence policy) was simply that no one could find the funding for the Conservative "Canada First Defence Strategy."

Under Stephen Harper, investments in the Canadian Armed Forces have been erratic, promised increases in funding have been scaled back, and more than $10 billion of approved funding was left unspent.

This mismanagement has left Canada’s Armed Forces underfunded and ill-equipped, and the courageous members of the Forces unsupported after years of dedicated service.

It sounded good. It's just a shame the new policy took until June 2017, well after the Trudeau government had won the October 15th, 2015 Federal election, to roll out..

As well, the new policy seemed to be more of a reaction to US policy which, under current US President Donald Trump, simply wasn't prepared to let Canada have as much of a free ride as had been true in previous eras.

If Canada could borrow military assets from its allies in order to complete a mission, then it would need to build up its indigenous capabilities.


The current statement of Liberal Defence policy (at least until after the next election, scheduled for October 21st, 2019) is the June 6th, 2017 "Strong, Secure, Engaged – Canada’s Defence Policy."

As outlined by Defence Minister Harjit Sajjan in his July 7th, 2017 statement in the House of Commons, "Strong, Secure, Engaged" – A new defence policy for Canada," the new plan will:


... recapitalize the Royal Canadian Air Force, with a full fleet of 88 advanced fighter jets to replace the aging CF-18s. This should have been done years ago.

The previous government planned to purchase just 65 fighters, but didn’t actually purchase any, and didn’t budget adequately even for that inadequate fleet. 88 fighters are required to fully meet our NORAD and NATO obligations simultaneously, not just risk manage them, as the RCAF has had to do for a number of years.

This plan fully funds, for the first time, the Royal Canadian Navy’s full complement of 15 Canadian Surface Combatant ships necessary to replace the existing frigates and retired destroyers. Fifteen. Not “up to” 15 and not 12. And definitely not six, which is the number the previous government’s plan would have paid for, as the Parliamentary Budget Officer reported last week.

The minister also promised to "recapitalize much of the Canadian Army’s land combat capabilities and aging vehicle fleets" and made "new commitments to emerging domains, particularly space, cyber and remotely piloted systems" in order to "address current and looming gaps in existing capabilities."

All of which sounds well and good, except when you note that, as outlined in the October 30th, 2018 Defence News post, "Canada to accept bids for new fighter jet in May — here are the potential competitors," Canada hasn't purchased any new fighter jets yet and doesn't even plan on taking bids for the replacement aircraft until May 2019.

As for the ships, it's worth noting that, as outlined in the February 8th, 2019 CBC News post, "Ottawa makes its $60B frigate project official, even as rival's court challenge goes forward," while a contract was awarded, no money seems to have changed hands.

Military procurement is a mess, and not likely to clean itself up anytime soon.


Most importantly, and as outlined in the March 6th, 2018 MacLeans post, "What’s happening to Canada’s defence spending?," no new funding was allocated in the 2018 Federal budget for the military, which kinda suggests that the Liberal defence policy is slowly walking down the same path as the previous Conservative plan.

As for Canada's space capabilities, there has been some movement, as outlined in the February 4th, 2019 post, "UTIAS-SFL and Raytheon Canada Building Military Funded Spy Sats," which noted $46.2Mln CDN for new funding under the Department of National Defence (DND) All Domain Situational Awareness Science & Technology (ADSA S&T) program.

Also noteworthy were the eight Canadian companies which received multiple contracts totaling $6.7Mln CDN through the Department of National Defence (DND) in late 2018 in order to develop "situational awareness" applications focused around the analysis and assessment of synthetic aperture radar(SAR) data generated through Canada's Radarsat program.

In this case, it was the funding mechanism, not the military strategy, which was noteworthy.

As outlined in the December 17th, 2018 post, "New Radarsat R&D Funding is Mostly for Software Analytics But Includes Some Interesting Surprises," the DND contracts were structured as public private partnerships with costs split 50-50 between DND and the various private sector participants.

But dropping a few million here or there for a few new programs doesn't amount to much compared to the total Canadian Armed Forces (CAF) annual budget of approximately $25Bln CDN.

Although the strategy remains the same, most would agree that space is a far more complex environment to operate in today, than it was when Lloyd Axworthy held public office.


Chuck Black is the editor of the Commercial Space blog.

Last episode: "Funding an Appropriate Force," as part four of "A Short History of Canada's Military Space Policy and How it Fits into the Current US Space Force Discussions," continues.

Next episode: "Future War, Micro-Sats Controlled by AI "BattleStars" Supported by Fast Launching, Hypersonic Transports and Space Based Solar Power," as part six of "A Short History of Canada's Military Space Policy and How it Fits into the Current US Space Force Discussions," concludes.
Posted by Chuck Black