Part Four: So You Want to be a Space Advocate? 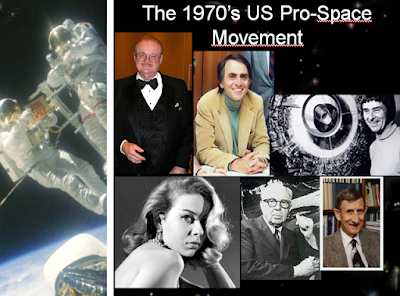 One of the best places to learn about space activism is the 1970's US pro-space movement.


As outlined in "Reaching for the High Frontier: The American Pro-Space Movement, 1972-1984" by Michael A. G. Michaud [i], the era saw the wind-down of the Apollo program and the ramp up of the space shuttle amidst an increasingly tight budget and the beginnings of an advocacy community convinced that “space holds answers to such real-world problems such as economic growth, environmental degradation, international tension and the threat of nuclear war.” [ii]

The final preface of the book was put together just before the tragic explosion of the space shuttle Challenger on January 28, 1986. It therefore serves also as a last gasp of the optimism of the Apollo era and an endpoint for the childhood of those who considered themselves to be the “Children of Apollo.” [iii]

But the key activists of this era were essentially either “citizens,” or “rebels” as defined in part three of this document, who articulated a vision of the favored outcome and put the issue on the public agenda for discussion. Missing from this discussion were the “societal change agents” and the “reformers” who nurture any emerging cultural consensus and bring about real institutional change.


Most of the space activists from the 1970's were academics and artists interested in commercializing their ideas and obtaining tenure in the educational system. Their roles didn't require real change in order for them to be perceived as being historically successful. They included:
But as “citizens” and “rebels,” the advocates of this era, while providing alternatives to the existing way of doing things, weren't really going out and building things or providing practical suggestions to those who were. They were academics and artists, fascinated with the concepts surrounding the new ideas and interested in promoting those concepts in the abstract, but without the skill-set to actually build something.

There were no “social change agents” to nurture the emerging public consensus and no “reformers” to take control of the agenda and move the big ideas towards action.

And that, in a nutshell, is why we never moved out into space. Even worse, the 1986 Challenger disaster essentially halted funding on many of the projects near and dear to the space community.

But all was not lost. The "social change agents" and "reformers" who built hardware and helped humanity move our next space age forward, along with a discussion of their historical antecedents, will be the subject of another article in this series, after a discussion of the Canadian landscape.

[iii] As outlined in the October 9th, 2001 Space Daily article, “The Children of Apollo & Visions for the Future,” by Eric Strobel, at http://www.spacedaily.com/news/oped-01c.html,  the “Children of Apollo” are members of the generation growing up during the 1960’s and 1970’s which feel “vaguely cheated that the nation that went from Kitty Hawk to Tranquility Base in a single lifetime seems likely to go no further in their lifetimes.” Last accessed September 16th, 2016.

Last Week: Varying the Characters and Narrative to Move the Story Forward in Part Three of "So You Want to be a Space Advocate."

Next: Measuring the Current Canadian Space Sector as Part Five of "So You Want to be a Space Advocate" continues!
Posted by Chuck Black